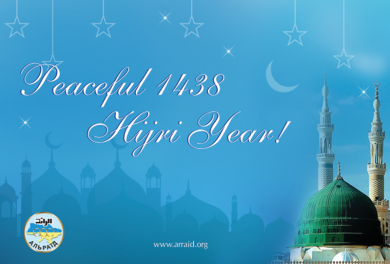 Our beloved Prophet Muhammad’s (peace and blessings be upon him ) Hijrah (resettlement) is a source of inspiration for every Muslim. Muhammad, peace and blessings be upon him, didn’t just sit and wait for a particular date to change his life — on the contrary, he was willing and eager to do as instructed by the Lord. Besides, he never underestimated the power of dua’, and called his adherents to ask God’s blessing and assistance before starting any deed, to make it good both for this world and on the Day of Judgement. He was looking for any good chance for it, not jus sat awaiting for the chance itself to find him. As a result, what appeared to be a random date of resettlement not only changed his own life, but became a crucial point of spreading Islam and, further, gave a start to a new lunar calendar.

Second, if we recall the history of that resettlement, — it was the aggression by pagans that made Muslims do it. Having driven the believers out of Makkah, they weren’t satisfied with that and started using every opportunity to hound Muslims to death. We all know what the result was: siege of Medina, organised by the union of tribes, became the turning point of the history of Islam. Muslims, who seemed so eager to retreat and succumb forever to the greedy, unfair and aggressive neighbours in order to keep the peace at any price, pushed forward on the defensive, unexpectedly for the attackers. And instead of Medina capitulation and mopping up its inhabitants, as the aggressors planned, the whole story ended with capitulation of Makkah and amnesty for almost all of its inhabitants (besides a dozen of people who were extremely cruel  in persecuting, torturing and murdering Muslims).

This is a very important and informative lesson for the current situation all the Ukrainians  — both Muslims and non-Muslims  — faced today, like the people of Medina  — both Muslims and non-Muslims  — faced the need to defend their land, their homes, their families and their very lives from the aggressor. They were of different ethnic and religious background, but the external threat united them, and make them take the best of each ethnic and religious group’s heritage, which, in the end result, helped all of them survive. ANd not only survive, but become a wealthy Town of the Prophet.

We, the AUASO “Alraid” team, congratulate every Muslim on occasion of 1438 Hijri New Year from the bottom of our hearts.

We don’t offer to make some special event of this date. We, however, call upon everyone to recall the circumstances of the Prophet’s resettlement that resulted in a turning point of the world’s history. “Indeed, Allah will not change the condition of a people until they change what is in themselves.” [Qur’an, 13:11]

We are in a similar situation now. And all of us — both Muslims and non-Muslims, descendants of different ethnic groups — we’ll be able to defeat the external enemy if we defeat our own lacks and flaws, stick together and unite all the best from all our cultures of Ukrainian people. Because we are Ukrainians, and we can win only together and by the grace of God.