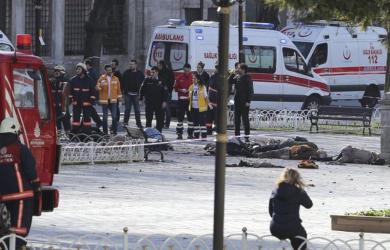 A terrorist attack at Sultanahmet Square resulted in death of 10 people, another 15 injured.

Another shock struck Turkey: a terrorist attack at Sultanahmet Square resulted in death of 10 people, another 15 injured. Those who facilitated that crime obviously did not bother that innocent people are to suffer, nor did they have any doubt when choosing the crimescene between the Museum of Ayah-Sofia and one of the largest and most popular mosques of Istanbul — the Blue Mosque (Sultanahmet).

The most cynical thing about the situation of Turkey being subject to terrorist attacks over the past few years is — it was Turkey to give refuge to millions and to organise humanitarian aid for suffering Muslim regions; it was Turkey who fed the hungry and standing firmly against the oppressors. By destroying Turkey from the inside, the plotters intentionally try to deprive many people of the hope for help, for often nobody else offers such help.

Ukraine’s Muslim communities share the rage of Turkish citizens. Anyone of us could be there, for Ukrainian believers, as well as many Muslims all over the world, try to come and pray at the famous Blue Mosque when in Istanbul. this place, in the historical city centre, is also a popular sight for Non-Muslim tourists.

As Turkey’s President Recep Tayyip Erdogan said, “Turkey is the main target for all the terrorist organisations of the region for its trenchant policy in combating terrorism, ISIS in particular”. He stressed that the wave of terrorist attacks is another argument for the need to unite in combatting that evil.

We offer our heartfelt condolences for the families who lost their relatives in this act of terror and pray for Paradise for the innocent victims. We also pray for the wounded and wish them the soonest recreation possible. Body recreation, no matter how long it will be, will be faster than overcoming the psychological trauma, for the victims will have to combat their fears and learn how to trust people again, which is hard in their situation.

God bless the people of Turkey and send them patience, endurance, and courage in this grieve hour!