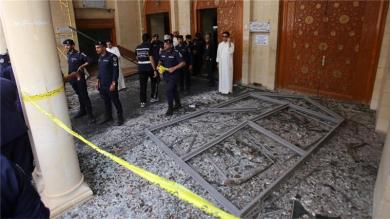 An explosion at Shia mosque in the capital of Kuwait

This day was marked by two sad occasions in the world: an explosion at Shia mosque in the capital of Kuwait, and massacre of the peaceful holidayers at one of the hotels  in the Tunisian coastal city of Sousse. 25 people died in the first attack at the moment, 202 wounded; 27 people were shot dead in the second attack. Both crimes were claimed by so-called “Islamic State of Iraq and the Levant [ISIL]” terrorist group. We, the AUASO “Alraid” team,extend our sincerest condolences to the victims of those cowardly acts, their families and friends, and pray that Allah Almighty lay them to rest.

We also call upon the Kuwait and Tunisian authorities and the global community for a thorough investigation of both incidents and severe punishment for the ones responsible.

Holy Qur’an (5:32) equates unlawful murder of one person with massacre of the whole mankind; moreover, judging one’s sordid desires with as it were the God’s will is also the grievous sin. All the more so, such crimes were committed during the Holy Month of Ramadan; the month where even a small quarrel over some silly matter can deprive the fasting person of his reward for abstinence from food, drink and intimate marital relations with their spouse from dawn to dusk. It’s impossible for a normal human being, a Muslim to imagine what a person capable for something like that musl have in his mind.

We wish the wounded people that both their physical and psychological trauma is healed as fast as possible, and we wish patience and understanding for their relatives and friends. People who survived such horror need time to learn how to live with that, adapt to normal life and learn how to feel safe in everyday situations once again.We pray that Allah Almighty sends wisdom and patience upon all the mankind, because no matter of our different exterior, beliefs and preferences, we all have to live side by side on this planet.