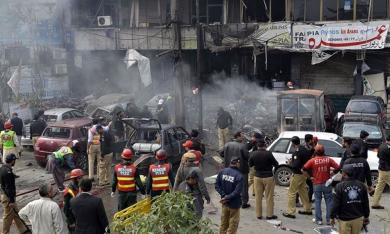 With the grievest pain and sorrow we, the AUASO “Alraid” team, tracked the news from Pakistan, where 72 people were killed yesterday, on March 27. About a hundred persons are currently on the edge of life and death, with the general number of people injured hitting the score of 315. All of that happened, because a member of the local “Taliban” who considered himself arbiter of fate and blew himself up.

Holy Qur’an (5:32) equates unlawful murder of one person with massacre of the whole mankind; moreover, judging one’s sordid desires with as it were the God’s will is also the grievous sin.

We believe than only the knowledge can stop the escalation of violence, hatred and mutual phobias. We are also concerned that the knowledge of such kind of actions being actually prohibited, not praised, by the teaching of Islam, should be gotten across both Muslims and non-Muslims, for the whole society glamorizes such attacks for ignorant individuals, when people misuse the labels “Shahid”, “Shahid belt”, “Islamist”, “Paradise and the houris” etc. And some of violent people really start believing that committing such crime is some “act of honour”.

That terrorist attack clearly indicated that the terrorists don’t bother targeting some specific group. Indeed, there were some Christian families having their Easter picnic at Gulshan-e-Iqbal Park; most visitors to that place, however, were Muslim families who brought their children to this popular public space with many playgrounds for children. Thus, most of the bomber’s victims were Muslims. Terrorists just don’t care whom they kill, all they care for is raising fear, hatred and hate among the people of different religions, ethnic backgrounds, countries, races and civilizations.

For that reason, we fully support the RAMU “Umma” initiative to dedicate the nearest Friday preaching to explaining the Islamic ban for unlawful killings and terrorist attacks, as well as for sympathies for such acts and ideas.

Said Ismagilov, Mufti of RAMU “Umma”, hit the spot: we need to make this message clear for as many people as possible, in order to refrain some from making grieve mistakes, and others from prejudice and labeling other people.

The Mufti stressed: “Suicide itself, and, moreover, aggravated with massacre of innocent people, won’t bring the performer to the “hot houris’ of Paradise”, but to the hottest flames of Hell. Those people are murderers. Don’t help the recruiters romanticize those crimes in the eyes of ignorant people - don’t refer to murderers as “Shahids”!”

We wish the wounded people that both their physical and psychological trauma is healed as fast as possible, and we wish patience and understanding for their relatives and friends. We pray that Allah Almighty sends wisdom and patience upon all the mankind, because no matter of our different exterior, beliefs and preferences, we all have to live side by side on this planet.