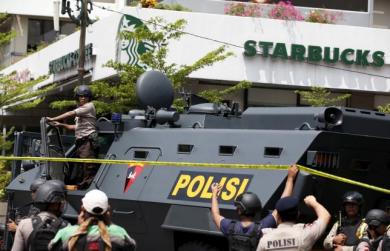 We, the AUASO “Alraid” team, offer our heartfelt condolences for the families who lost their relatives, and for all who suffered any kind of trauma in this attack

We always try to keep in touch with foreign embassies in Ukraine, and often exchange letters and postcards. It’s been the second day in a row, however, that our letters contain condolences: a terrorist attack on the visitors of a cafe in Jakarta, Indonesia occurred less than 24 hours after the explosion at Sultanahmet square in Istanbul, Turkey were officially recognized as acts of terror.

We, the AUASO “Alraid” team, offer our heartfelt condolences for the families who lost their relatives, and for all who suffered any kind of trauma in this attack.

We also express our heartfelt condolences for the people of Turkey, who continue to bury their sons and daughters: a a bomb-studded car exploded near the police station in the town of Cinar, Diyarbakir province; 5 people were killed (including a woman with a toddler) and 36 were injured.

No doubt that the citizens of those countries as well as the whole global community are expecting for a careful omnibus inquiry of both incidents and severe punishment for the ones responsible; and we are pretty sure that the Indonesian and the Turkish authorities will do everything possible to reveal all the individuals involved in the attacks and prevent such acts of terror in the future.

The Holy Qur’an (5:32) equates unlawful murder of one person with massacre of the whole mankind; moreover, judging one’s sordid desires with as it were the God’s will is also the grievous sin.

We wish the wounded people that both their physical and psychological trauma is healed as fast as possible, and we wish patience and understanding for their relatives and friends.