Islam In Ukraine And Merits Of The First 10 Days Of Dhul-Hijjah: A Seminar For The Muslims Of Sumy 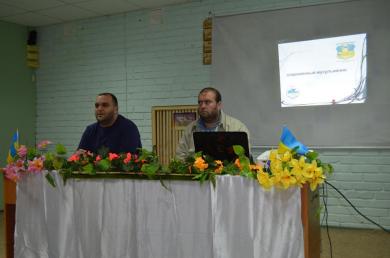 Islam In Ukraine And Merits Of The First 10 Days Of Dhul-Hijjah: A Seminar For The Muslims Of Sumy

Mr.Muhammad Al-Ustaz, Imaam of the Luhansk Cathedral mosque who was forced to leave his home as the terrorists occupied the city, arrived to Sumy last Friday in order to spend there several days, do the Friday Preaching and give a seminar at the local Muslims’ request.

He not only spoke about the  merits of the first 10 days of the month of Dhul-Hajjah and presented the most concentrated hadith by Prophet Muhammad (peace and blessings be upon him) on dhikr to three dozens of visitors, but also called to discuss the current situation in Ukraine.

The Imaam reminded of the necessity to appreciate the fact that neither islamophobia nor xenofobia is spread in our country, that people of different ethnic and religious background get along well and have respect for each other. One mustn’t take that for granted, but do everything possible to make it last; to maintain, strengthen and develop the good neighbourhood and mutual understanding. And as the good relations take not only mutual respect, but understanding each other well, one has to try to learn the other people better and give a worthy presentation of themselves, including their religion and culture.

The audience also took part in the vivid discussion of a Muslim’s everyday matters in non-Muslim society, hijab, on building in five prayers in one’s everyday schedule and may other.