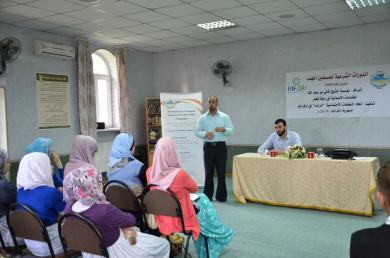 Mr.Tariq Sarhan, a guest lecturer from Kyiv, spoke of patriotism, responsibility of defending one’s home and family from the invaders

Such conclusion was made by the participants of a seminar held at Vinnytsya Islamic Cultural Centre on September 14. Mr.Tariq Sarhan, a guest lecturer from Kyiv, spoke of patriotism, responsibility of defending one’s home and family from the invaders, and also drew parallels between the current situation in ukraine and siege jf the city of Madinah undertaken by the Meccan pagans in the times of Prophet Muhammad (peace and blessings be upon him).

Indeed, human nature hasn’t changed much over the past 14 centuries: both then and now some people put up a fight against their neighbours because of hate, others joined them willing to gain power, and others fell for promises of generous financial gain. Besides, the lecturer stressed another parallel: allies of the people of Madinah who had to provide them with military assistance preferred leaving things to chance. Doesn’t that remind the position of the countries who stood as guarantors in Budapest Agreements and now are in no haste to provide military assistance to Ukraine?

To that end, Mr.Sarhan spoke of hardships the Lord sends to his servants; of reasons for such hardships and ways to overcome them with dignity, relying on God almighty. And the main symptom indicating that a person gained something from overcoming them is increased level of their morals and obedience to God.

Besides, every person of three dozens listeners could get answers for their questions both regarding the seminar and their own life situations.