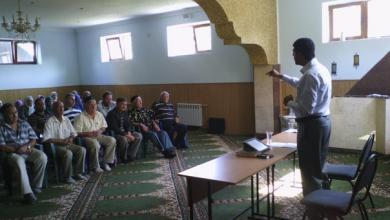 Series of lectures meant to help the believers psychologically overcome the events going on in Ukraine and the rest of the world were held at Islamic Cultural Centres of Zaporizhzhya and Odessa. A reminder that one needs to defend their Homeland, stand tall and do everything possible to overcome the hardships will have a most practical meaning for Muslims of Zaporizhzhya in the nearest future: parishioners of the local ICC are going to dig the fighting position tranches this week in case the city gets surrounded by the occupational armed forces. It bears reminding that a similar cycle of lectures was held in Kharkiv a week earlier.

The Odessa and Zaporizhzhya ICCs had three lectures each, and after that the facilitators asked every visitor to join the dinner. Curiously, some non-Muslims came along with their Muslim friends to hear about patience, overcoming the hardships and good-naturedness. In Zaporizhzhya lectures were given by the local ICC mosque Imaan Mr.Muhammad Mamutov, Mr.Bilal Khalid and Imaam of Luhansk Cathedral mosque now staying in their city; in Odessa the lecturers were Head of the local ICC Mr.Bilal Hamza and Shaikh Abdulghani Edgar.

In the first lecture the lecturers touched the base of hardship sent upon the believers by God; spoke about the reasons of hardships in our lives and the importance of accepting them with dignity and non-desperation, and also about becoming a better person while overcoming them.

In the second and the third lecture, they drew a parallel between between the Muslims who stood on the defencive of locade Madinah (in the times of our Prophet, peace and blessings be upon him) and the blockade sector of Gaza, cheered up the audience by speaking about the guarantees for success and victory, and explained the qualities a believer must have to achieve it.

Ukrainian Muslims worry not only about the destiny of their beloved Homeland, but also about their brothers and sisters in faith in the blockade Gaza, Syria, Myanmar, Iraq… And while they can participate in helping defend the country and assisting army and displaced people personally, Ukrainian Muslims can mostly only pray for their coherents in the distant lands and boycott some goods produced by the aggressor country in an attempt to have some economical impact on it.