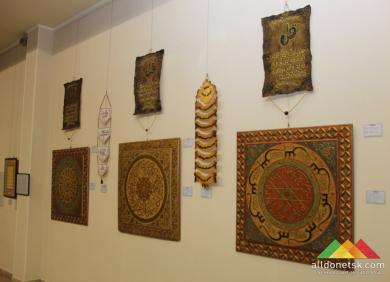 Exhibition of fine arts “East is a delicate matter” was to be held at “ArtDonbass” Art Exhibition Centre of Donetsk from May 30 to July 15. The facilitators chose a wonderful exhibition hall, collected over 500 showpieces, selected a quatrain by Indian poet Rabindranath Tagore as a motto… All their efforts were, however, downplayed by the separatists spreading terror over the city: only a few people risked their own safety to admire the fine arts. The situation got worse when the National Guard liberated Slavyansk, as local terrorists fled to Donetsk. All these factors caused the early closing of the exhibition — a week earlier than the announced date.

“We Wanted To Provide The People With A Creative Escape”

Ms. Catherine Kalinichenko, the Centre’s Art-Director, realised the risks of holding such exhibition in the zone of Anti-Terrorist Operation (ATO), but still went at the project in order to give the local people at least some creative escape from the tense everyday realities: “Today, in such a difficult period, It’s worth having a break and think about the sense of life while becoming familiar with the culture of countries represented, in peace and quiet.”

AUASO “Alraid” Donbass regional branch had similar motivation as well. They eagerly collected the showpieces, willing to once again remind the visitors how important it was to remain humans even in the hardest situations. “The air in the city has been depressed for several moth already, people are being kidnapped and tortured, threatened with arms for being any sort of “different” … we just wanted to provide people with psychological escape,” — one of the activists shares.

We hope that people of Donbass can get their normal life back as soon as possible, where they will be able to freely afford themselves such small mercies as well, without any risks for their own safety.