On Lofty Matters — At The Frontline 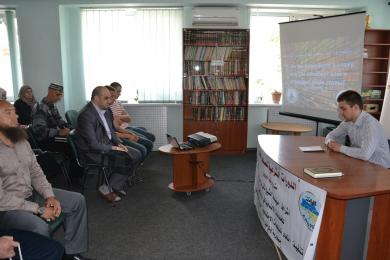 Mr.Yevhen Glushchenko, Imam at Kharkiv Islamic Cultural Centre Mosque, touched the base of hardship sent upon the believers by God

The people of Kharkiv region live practically at the frontline, as a full-blast military actions are being held in the neighbouring Donbass? fnd Kharkiv volunteers run off their legs trying to help both the Ukrainian soldiers and the forced migrants. Even in this tense time, however, they never forget about the spirituality. Thus, series of lectures took place at Kharkiv Islamic Cultural Centre, covering the topics that were meant to help the believers psychologically overcome the events going on in the world around them.

Ukrainian Muslims worry not only about the destiny of their beloved Homeland, but also about their brothers and sisters in faith in the blockade Gaza, Syria, Myanmar, Iraq… And while they can participate in helping defend the country and assisting army and displaced people personally, Ukrainian Muslims can mostly only pray for their coherents in the distant lands and boycott some goods produced by the aggressor country in an attempt to have some economical impact on it.

Mr.Yevhen Glushchenko, Imam at Kharkiv Islamic Cultural Centre Mosque, touched the base of hardship sent upon the believers by God; spoke about the reasons of hardships in our lives and the importance of accepting them with dignity and non-desperation, and also about becoming a better person while overcoming them.

The second lecturer, Mr.Murad Putilin, Head of the Muslim religious community “Milost’” (Rus. “Mercy”), drew a parallel between between the Muslims who stood on the defencive of locade Madinah (in the times of our Prophet, peace and blessings be upon him) and the blockade sector of Gaza.

After the break for lunch the last lecture of the day took place. Shaikh Imad Al-Abdallah cheered up the audience by speaking about the guarantees for success and victory, and explained the qualities a believer must have to achieve it.