Closing of the Second International Summer School for Islamic Studies 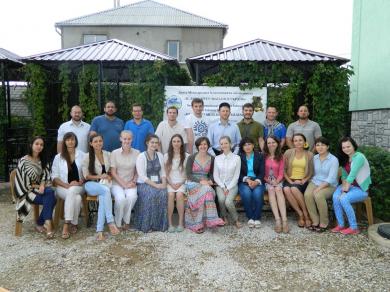 Closing of The Second International Summer School for Islamic Studies

The participants of the five-day Second International Summer School for Islamic Studies (launched on June, 29 in Crimea) went home on July 4. The School was organized and promoted by AUASO “Alraid” and AUSO “Ukrainian Centre for Islamic Studies”. We reported about the first three days of their work earlier, but the last two days of the event were equally interesting and rich for discussions and new information on processes in modern Islamic World.

Modern media space brought a range of Islam-related issues in focus. Those issues aren’t something new below the surface, namely so-called “salafism”, “Hizbu-t-Tahrir” and “habashism”. The lecture by the Master of Shariah Mr. Seiran Arifov explained those sects and caused a vivid discussion among young islamic researchers who wanted to know as much details as possible.

The fourth day of School was also marked by the lecture by Mr. Said Ismagilov (Mufti of RAMU “Umma”) on history and modern state of  Ukrainian Muslims religious setups and administrations. The information provided was quite unique, as no sound research regarding this issue was done since 2006.

Those lectures were supplemented by the reports by Ms. Elmaz Khairuddinova  (“Study of Liquidation of Muslim Cultural Institutions in the Crimean Autonomous Soviet Socialist Republic during 1920th-1930th”), Ms. Oksana Hudeyberdyyeva (“Grassroots Islam of Crimean Tatars”) and Elena Shafarenko (“THe first and The Earliest Interpretation of the Meanings of the Holy Qur’an”)

Sufism, Fanaticism and Issues of Gender

On the last day of the School Mr. Igor Kozlovskyi (The President of the Centre for religious Studies and International Spiritual Relations) presented his lecture on history of sufism, it’s nature, doctrine and transformations.

Vivid discussion bursted by Mr. Tariq Sarhan (Head of  the AUASO Department for Introducing Islam and Eastern Culture) and his lecture about the nature of fanaticism which is disapproved by Islam as extreme. The participants discussed some real situations within the meaning of information they received.

Issues of gender were discussed, too. They were brought up in the reports by Galina Kozachok and Maya Petlyakova.

During the Final Ceremony a short documentary about AUASO “Alraid” activity had been presented. All participants received certificates and gift packs that included copies of Translation of the Meanings of the Holy Qur’an by Elmir Kuliev. Everyone went to Eupatoria for sightseeing and excursion afterwards.