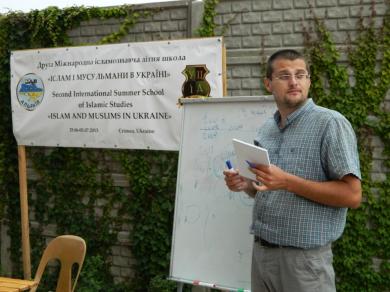 The five-day Second International Summer School for Islamic Studies (launched on June, 29 in Crimea) had a rich and various agenda. The first day was rather introductive: all the participants introduced themselves and tell about the subject of their scientific interest. At the end of the day everybody watched the “Haitarma” movie about the Crimean Tatar Deportation in 1944, which caused a sensation in Ukraine and Russia.

There was only one lecture that Saturday, aiming to make the disclosure on the depths of History. Mr. Vitaliy Overko, senior research assistant at the Department of Physics of the Donets’k National University, told how Islam and the Science interacted in the times of Al-Haisam to Abu AsSalama.

Islamic Impact on Europe, Reasons of Dissent and Intellectual Competition

On the second day Islam in Europe was the main issue discussed by the participants. Both history and development perspectives of European Muslims were discussed, taking into account existing problems and discords.

They chose respective topics for lectures and reports: “Perspectives and Problems of European Islam” by Oleh Brovko, “Matters of Interpreting Symbolistic Language of Islamic Alchemistry” by Ruslan Khalikov, “Islam in Moldova: History and Contemporary” (by the Mufti of Moldova Mr. Sergiu Sokirke), “Contemporary Matters of Development of Islam in Europe” by Mr. Alexander Kovtun and “Social Attitudes of the Native French People to Muslims in Dwelling, Professional and Labor Fields” by Ms. Bohdana Sypko.

Besides that Mr Seiran Arifov, Master of Shariah, presented his lecture “Schools of Shariah Law and Reasons for Discords”, which helped the participant to develop a better understanding and concentration on processes in the Ummah.

In the evening everyone could take part in the intellectual competition organized by the activists of “Emel” social organisation, who are skilled in such competitions as they regularly make them for the Crimean Tatar Youth.

Islam On the Former Russian Empire Territory and the “Arab Spring”

The third day of the School was dedicated to two topics at once.

The first one - “slam On the Former Russian Empire Territory” - was close for the Ukrainians both historically and geographically.

The report by Ms. Elvira Muratova on “History of Islam in Crimea” and the lecture “Islamic Factor in Social Transformation Processes in the Russian Federation at Early 21 Century” by Mr. Maxim Volosevich were presented within this topic.

The “Arab Spring” is widely discussed for several years now. They mention it in the news and analytics as well as in the blogs and social networks statuses over and over again. Due to that, the participants of the International Summer School for Islamic Studies couldn’t fail to examine this one as well.

After two lectures, namely “Muslims in the Media” by Ms. Elvira Muratova and “The Peculiarities of “Arab Spring” by the leading specialist of National Institute of Strategic Studies of the National Science Academy of Ukraine Mr. Vyacheslav Shved, the reports dealing with different aspects of this social unrest were presented, namely “Reasons and Implications of Arab Spring” by Ms. Oksana Loik, “Phenomenon of Revival of Political Islam in Arab Countries” by Ms. Yana Kavyrshina and “The Arab Spring”: Behind The Curtain” by Eugenia Filonenko.

The participants discussed the fresh information later that evening.