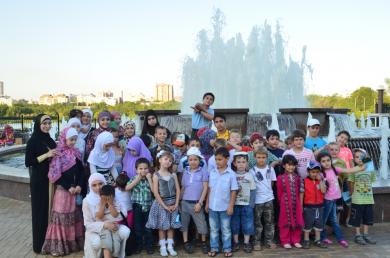 More than 40 children of both sexes from Donets’k and Lugans’k (boys aged 7-11, girls aged 7-14) attended the Annual Five-Day Children’s Summer Workshop held in Donets’k Islamic Cultural Centre. The workshop ended in the beginning of June.

Such workshops serve the children to be taught religion, prayers and peculiarities of Islamic way of life.

The programme was quite multifarious. It included lectures, practical classes, the Holy Qur’an lessons, the best mosque drawing competition, fresh air and exercises and walks in the city.

Besides that, the children attended the City Dolphinarium and The Ahat’-Jamee Mosque.

Respect for the Parents and Care for the Nature

The workshop hosts made sure that the lectures were not only interesting and informative, but also included behaviour patterns for children of the certain age.

For this reason young participants not only studied the Basis of Islam, but also learned by example of Prophet Muhammad, peace and blessings be upon him, to have respect for the parents and care for the nature.