Muhammad Asad: “Any extremism, when coming to power, regenerates into a totalitarian state and dictatorship” 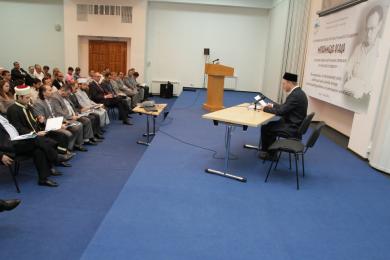 Muhammad Asad: “Any extremism, when coming to power, regenerates into a totalitarian state and dictatorship”

One of the problems dealt with at the International Scientific and Practical Conference “Significance of Scientific and Intellectual Legacy of Muhammad Asad” held on May 16, 2013 was dissemination of radical views, not least due to circulating biased and distorted information about Islam by mass media and scientific circles.

Muhammad Asad pointed to the danger of these trends as early as in the first half of 20 century. He embodied the bridge to understanding between Western and Islamic civilizations. For Muslims, Asad is a gift from Europe to the Muslim world. For Europeans, he is a unique source of learning about the Muslim world through the prism of European mentality.

A film produced by George Mish, of which many episodes were shot in Lviv, is devoted to this prominent resident of Lviv. As it has won many awards at film festivals from Jerusalem to Vancouver, conference participants and guest were shown its promo clip.

“Water spoils when it stands still”

Mr.Yury Kosenko, author of the translated brochure about Muhammad Asad, points out in his report: “There’s an interesting phrase in the Muhammad’s book ‘Way to Mekkah”, formulated by him after watching daily life of desert inhabitants: ‘Water spoils when it stands still’. This phrase is a peculiar description of his life, as Asad used to be in move. He traveled alone on camel back across the deserts of Arabia peninsula, watching the life of common people. His written stories feature in-depth psychological analysis; and not less deep was his learning of Islam …

Muhammad Asad stood against extremism and said that any extremism, when coming to power, would inevitably regenerate into a totalitarian state for dictatorship”.

Also, Mr. Kosenko informed with sadness his observations about the film devoted to Acad: “Shooting in Ukraine by interviewing occasional passers-by in Lviv streets clearly shows that the majority of Ukrainians have never heard about their prominent countryman. I hope that thematic events like this will gradually rectify the situation”.

“You may like it or not, but we are living today disunited. We all are part of the integrated whole, and we should learn to interact with each other effectively, because it’s the only way of gaining prosperity for all members of our community”.

“Creating a circle of young researchers of Islam at our Center”

Also, the conference released results of the Sixth All-Ukrainian Contest of Islamic Studies. According to Mr. Said Ismagilov, Mufti of the Religious Administration of Muslims of Ukraine and the contest supervisor, awarding the contest winners at the conference with a title like this is very symbolic, as these young researchers of Islam are successors of the Asad’s scientific work.

Dr.Nikolay Kiryushko is the founder and the president of the All-Ukrainian Scientific Public Organization “Ukrainian Center for Islamic Studies”, which incorporates researchers of Islam from 12 Ukrainian regions, and the cities of Kiev and Sevastopol. In fact, he is the founder of a new scientific field, Islamic studies, in independent Ukraine. He is initiator and organizer of All-Ukrainian contests of scientific works devoted to Islamic studies, conducted by young researchers. The contests are undertaken in memory of Agatangel Krymsky, a Ukrainian Soviet historian, translator and oriental scientist, a founder of the Ukrainian Academy of Sciences (founded in 1918).

Dr.Kiryushko explains this initiative to the audience: “We have been conducting this contest, in order to show that Islam is the religion of peace and that it is not a teaching cultivating conflicts. We want very much to create a circle of young scientists at our Center, who will be elaborating this field. By now, our diplomats have defended six or seven candidate dissertations [dissertations for the degree of candidate of sciences; may be regarded as equal to PhD], and they’ve been writing papers where they offer the community unbiased information about Islam…”

“It is not a secret that there’re many manipulative technologies for stigmatizing Islam and portraying it in black colors… Our contest is not a large-scale one, it is small-scale, but we already have researchers acknowledged in scientific circles and mass media, who give unbiased information about this religion for the benefit of good neighbor relations and harmony in the society”.

“We’ve taken to investigate the impact of Islam on economic, political and cultural processes in the contemporary society, for effective use of this information in transformation processes that would improve the life of all our compatriots”.