Plenary sessions at the International Conference in Crimea: “language of propaganda is unacceptable for people of science” 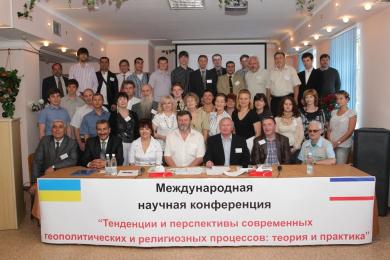 Plenary sessions at the International Conference in Crimea: “language of propaganda is unacceptable for people of science”

The Conference slogan was the phase “the more communications, the better is mutual understanding”. The Conference was proceeding in friendly atmosphere inclining to dialogue. Participants and guests kept talking at breaks, sharing experiences and opinions about problems articulated in reports.

“Language of propaganda, so commonly used by mass media in highlighting terrorism and its link to Islam, is unacceptable for people of science”

The most relevant and timely information was given by Mr.Dilaver Saidahmetov from I.Franko National University (Lviv, Ukraine) in his report “”Islamic” Terrorism: A Myth of Contemporary Geopolitics”. According to him, “there’s no room to terror in the true and genuine Islam”, and human’s murder, according to Muslim religion canons, is a gravest sin and a rebellion against the will of the Most High. He emphasizes that “language of propaganda, so commonly used by mass media in highlighting terrorism and its link to Islam is unacceptable for people of science”.

The role of religion in social life
Western scientists are prone to the conclusion about the need to revive religious institutes for elevating social morals. Prof. Yury Babinov (Sevastopol National Technical University) in the report “Christian-Islamic Dialog: Constraining Factors and Contemporary Gains” emphasizes the increasing role of religion in various walks of social life.

However, due to globalization and migration processes, mutual penetration and adaptation of opinions and cultures, no country can be found today where only one religion or one religion denomination would be followed. That is the reason why a communication tool like dialog is becoming so important now.

Sources and peculiarities of the Islamic culture of tolerance and “Arab spring” as a specifically Islamic democracy were explicated in the reports of Seyran Arifov, Master of Shariah, and Mr.Ali Mohammad Taha, “Alraid” chairman in Crimea.

Reports of Crimean scientists drew particular attention of the audience: “Black Sea Doctrine as an Urgent Regional and Geopolitical Issue”) by Dr. Andrey Nikiforov, dean of the Tavrichesky National University, and “Ethnic and Confessional Relations in Crimea as an Important Object of Scientific Studies” by Dr. Viktor Tur.

At sectional meetings, the audience could learn much new and interesting about geopolitics and current trends in international relations, the role and position of Ukraine in the global political process, “new” Middle East and transformation of geopolitical system. Relevant information was delivered by scientists from the Department of Kharkiv Institute for Economics of Market Relations and Management, located in Evpatoriya, Crimea (Dr. S. Fartushnyak), the Tavrichesky National University (B.Grushetsky, D.Halileva, E.Hayruddinova), the Crimean Republican Institute for Post-Graduate Pedagogical Education (Prof. M.Hayruddinov) etc.

Prof. Sergey Yurchenko, a political scientist, spoke about temporal characteristics of external political challenges faced by Ukraine and related with configuration of the key global tendencies.

Political scientists from the Kuban State University (Russia) made a questionnaire interview devoted to civil and religious identity in the South of Russia and North Caucasus. Its results were reported by Prof. Andrey Baklanov from Krasnodar region (located in the Southern Russia).

Also, Prof. Andrey Irkhin and Andrey Gubanov from the Tavrichesky National University presented the analysis of the Turkey’s role in the new architecture of the global order and the navy aspect of the Turkish security policy in the Black Sea; Mr. Zirak Abdullah Karim, a post-graduate student from T.G.Shevchenko National University (Lugansk) spoke about tendencies in cultural change in the Kurd community of contemporary Iraq.