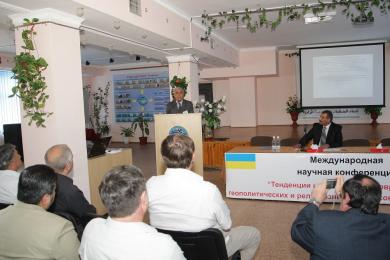 The International Conference “Trends and Prospects of Contemporary Geopolitical and Religious Processes: Theory and Practice” was held on the territory of Crimean peninsula (Ukraine). It was organized by the Ukrainian Ministry for Education and Sciences, Youth and Sports, the National Technical University (Sevastopol), the All-Ukrainian Association of Social Organizations “Alraid” and the Ukrainian-Arab Center for Scientific and Cultural Relations “Al-Kitab”.

In the opening day of the Conference, which was in Islamic Cultural Center of “Alraid” in Simferopol, issues of contemporary geopolitical and religious processes within the system of international relations were discussed by representatives from five countries of the Euro-Asian region: Ukraine, Russia, Poland, Czech Republic and Azerbaijan. In the second day the Conference continued in Sevastopol.

“Communications with colleagues are always informative and useful”

The opening address and congratulations with the Conference opening was delivered Prof. Henrik Hoffman, director of the Institute for Religious Studies at the Jagiellonski University (Krakow, Poland); Prof. Krzysztof  Kosior, Maria Skłodowska-CurieUniversity (Poland); Dr. Mariya Rosenko, dean of the Sevastopol-based Affiliation of the European University (Ukraine); Dr. Nikolay Kuznetsov, a representative from the Institute for Social and Political Studies of the Russian Academy of Sciences (RAS).

According to Mr. Robert Mobeli, a representative of the State University (Baku, Azerbaijan), “communications with colleagues are always informative and useful from whatever country they may come, because problems faced by the Muslim Community are similar everywhere”.

Scientists from five countries gathering under the same roof