Readers of Krupskaya Library in Donetsk are presented the book “Muhammad: Man and Prophet” 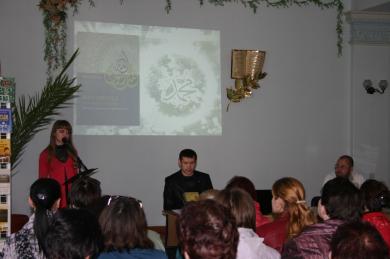 Readers of Krupskaya Library in Donetsk are presented the book “Muhammad: Man and Prophet”

The first public presentation of the book “Muhammad: Man and Prophet” was held in the conference hall of Krupskaya Library in Donetsk, which is an all-purpose scientific library. Its Russian translation and edition is a result of cooperation between the Religious Administration of Muslims of Ukraine “Ummah”, the All-Ukrainian Association of Social Organizations “Alraid”, and the library administration which offered the room but also invited the audience from among the library readers, teachers of secondary schools and lecturers from local HEEs.

More than 80 listeners showed positive opinions and responses about introductory information to this book, personality of Prophet Muhammad and action of “Alraid” and “Ummah”.

The idea of presentation was spoken out by Mr.Vitaly Overko, a Ukrainian Muslim. Having seen positive responses from the audience, he is intended to participate in arrangements of similar events in future.

Impressions of a person who came to Islam

Mr. Vitaly, who is a Ukrainian coming to Islam just several years ago, took on to present the book “Muhammad: Man and Prophet”, because he was eager to share his personal impressions of the man whose prophetic mission changed his life for better. He supplemented his presentation with famous people’s sayings about the Prophet, such as Bernard Show, Johann Wolfgang von Goethe, Karl Marx, Leo Tolstoy,Mahatma Gandhi, Otto Bismark, Vladimir Soloviyov and Michael Hart.

Mr.Rustam Husnutdinov introduced the audience to brief biography of the author of the presented book and highlighted the core fields of “Alraid” action. He ended up his speech by showing the video clip “All-Ukrainian Association of Social Organizations “Alraid”: fifteen years of service for society’s benefit”, illustrating the results of “Alraid” effort.