Round table at “Al-Masar”: “Golden mean” in Islam and the ethic of discord 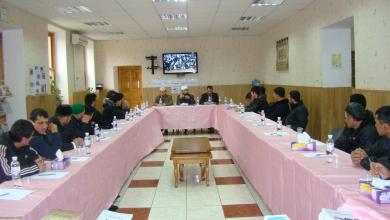 Round table at “Al-Masar”: “Golden mean” in Islam and the ethic of discord

The round table “Golden mean” hosted by the Islamic Cultural Center “Al-Masar” on April 12, 2013 was visited by more than thirty Muslims from Odessa. Members of various nationalities were brought together by the eagerness to extend the knowledge of “wasatyya” principle (“golden mean”, “moderateness”) and learn about ethics of discord in Islam.

Extreme rigour: an indoctrination of Satan

The principle of golden mean constitutes the basis for Sunnah of Prophet Muhammad (may be peace and blessings upon him) who warned his followers about intrigues of Satan: when this devil fails to avert a believer from the religious practice towards extreme nonchalance, he will care to turn him to the extreme rigour and overstatement of minor issues.

Consolidating on the common basis and overlooking differences in minor things

When the listeners began asking questions that concerned them, it was found that the foremost problem they were facing was discord among believers. The mediators gave detailed account of what is ethics of discord, and emphasized that the religion had the basis on which there could not be any discord, because it was clearly defined by Prophet (may be peace and blessings upon him). Yet, there may be other minor issues admitting variety of opinions.

As Muslims, we are required to learn to distinguish between them, overlook the differences in minor things and consolidate on the common basis.