Conference in Kyiv: introduction of Ukrainians to the legacy of Muhammad Asad, a world-wide Muslim thinker born in Lviv 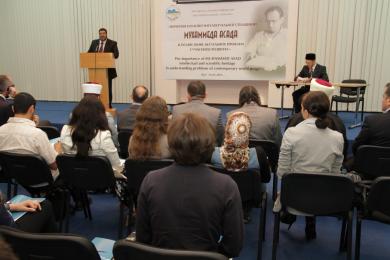 Conference in Kyiv: introduction of Ukrainians to the legacy of Muhammad Asad, a world-wide Muslim thinker born in Lviv

The Scientific and Practical Conference “Significance of Scientific and Intellectual Legacy of Muhammad Asad”, held in the conference hall of the Institute for Oil Transport and attended by more than 80 participants, ended up several hours ago. It was organized by the All-Ukrainian Association of Social Organizations “Alraid” and the All-Ukrainian Public Organization “Ukrainian Center for Islamic Studies”, jointly with the Institute of World History at the National Academy of Sciences of Ukraine, to introduce Ukrainians to the personality of their outstanding countryman.

The conference evokes live interest in scientific and diplomatic circles

The organizers’ invitation was responded by plenipotentiary ambassadors of the Austrian Republic, the Kingdom of Saudi Arabia, the Republic of Iraq and the Republic of Palestine; the conference was visited by guests from the consulate of the Hashemite Kingdom of Jordan in Ukraine, and by director of the Arab House in Ukraine. Not lesser interest was shown by representatives from scientific circles, as researchers in Oriental and Islamic studies from Ukraine, Poland and Austria either came or sent reports.

Although Muhammad Asad gained widespread international recognition, in his native land his personality is still known just to a narrow circle of scientists. Yet, even their learning is confined to superficial facts from the biography of this outstanding person, not to mention the total lack of works devoted the Asad’s legacy in the national Islamic and Oriental studies.

Born in Lviv, Muhammad Asad (Leopold Weis), therefore, belongs to scientific communities of several European countries: first, Ukraine, because Galicia (Lviv is the central city of Galicia) had always been a center of the Ukrainian culture; second, Austria and Hungary (Lviv in that time was in the Austrian and Hungarian Empire); third, Poland, to which Lviv had belonged earlier and where a strong Polish cultural Diaspora had been established.

At the same time, Muhammad Asad was among the founders of Pakistani and Saudi statehood; he advocated interests of Palestine and its Arab residents.

Also, the conference announced the results of VI All-Ukrainian Contest on Islamic studies. According to Mr. Said Ismagilov, Mufti of the Religious Administration of Muslims of Ukraine and a conference mediator, awarding of contest winners at a conference like this is a very symbolic matter, because these young Oriental scientists are successors of the scientific work of Asad.

The first place was taken by Mr. Maxim Volosevich with the research “Islamic Factor in Social Transformation Processes in the Russian Federation at Early 21 Century”, the second one – by Ms. Viktoria Paliy (“Financial and Credit Systems in Islamic Countries”), the third one – by Mr. Bohdan Sepko (“Social Attitudes of French to Muslims in Dwelling, Professional and Labor Fields”), the fourth one – by Ms.Yulia Andreyeva (“Social and Economic Background of Extremism, the Case of Shahidism”), the fifth one – by Ms. Oksana Loik (“Reasons and Implications of Arab Spring”), the sixth one – by Ms. Oksana Hudeyberdyyeva (“Daily Islam of Crimean Tatars”), the seventh one – Ms. Elmaz Hayruddinova (“Study of Liquidation of Muslim Cultural Institutions in the Crimean Autonomous Soviet Socialist Republic”), and the eighth one – by Ms. Yana Kavyrshina (“Phenomenon of Revival of Political Islam in Arab Countries).