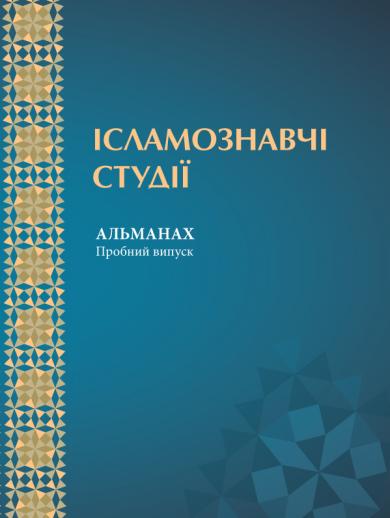 The first trial issue of the on-line journal “Islamic Studies”, coming out in early April 2013, was devoted to analysis of contemporary transformation processes in the Islamic area. This publication is a joint project of “Alraid” and the All-Ukrainian Public organization “Ukrainian Center for Islamic Studies”. The first issue has already been available for reading and downloading. The publishers expect to make the journal regular.

The journal will be published quarterly, in Ukrainian, Russian and English.

The authors will focus on important issues of daily life and building up the poly-ethnic Muslim community in Ukraine, its contributions in building up a modern democratic European state that is a supreme goal of our common motherland, fostering high morals and spirituality, national and confessional peace and accord in Ukraine; the role of Crimean Tatar issue in policy and civilization specific processes in Ukraine.

Another priority subject is modernization processes in the Islamic world, development of the Islamic banking, the role and the position of Islamic world in the contemporary political and economic processes across the globe; the role and the significance of scientific heritage of outstanding Ukrainian scientists and thinkers (I.Gasprinsky, M.Asad, A.Krymsky and others).

Also, the on-line journal will display analytic studies, articles and press-releases about important problems of the European Muslim community and its contributions in developing the contemporary European civilization.