Awards for young fans of Crimean Tatar literature and recitators 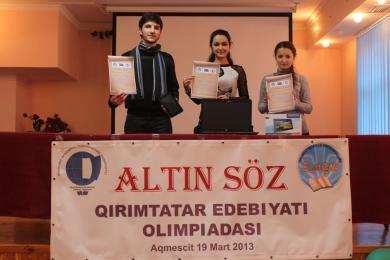 The Olympiad on Crimean Tatar literature “Altyn syoz” (“Golden word”) was organized on March 19, 2013, in the Islamic Cultural Center in Simferopol. Its principal organizer was the Public Organization “Emel”, supported by the Crimean University for Engineering and Pedagogy.

The contestants were nearly twenty students and graduates from various HEEs of Simferopol, including the above mentioned University.

According to Mr. Muslim Dervishev, “Emel” chairman, the Olympiad is a next step of “Emel” in expanding cooperation with Crimean HEEs, and continuation of efforts aiming to revive Crimean Tatar culture. Lecturers from Crimean University for Engineering and Pedagogy, which were members of the jury, hoped that the Olympiad would become traditional and there would be more participants next year.

The contest proceeded in three phases: writing a scientific article on free subject, expressive recitation of a poem by a Crimean Tatar poet, and writing a composition on a subject fixed in advance.

The second round of the Olympiad in which participants contested in recitation was the most exciting. Poems’ subjects varied, ranging from love lyric, patriotic lyric to power of faith and spirit.  Performances of several participants were real stylized spectacles which atmosphere overwhelmed both the audience and the jury.