Exciting and useful books for coloring and a copybook of Arab handwriting: making little children happy 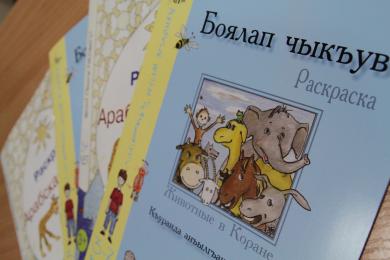 Exciting and useful books for coloring and a copybook of Arab handwriting: making little children happy

The All-Ukrainian Association of Public Organizations (AAPO) “Alraid” has issued an educative copybook for children “Arabic handwriting” and two books for coloring “Arabic Alphabet” and “Animals in Koran”. They are meant for free distribution in Islamic cultural centers and public organizations incorporated in “Alraid”. Hurry up to make your children enjoy the beneficial and exiting leisure together with you!

A copybook of Arabic handwriting is an advanced manual for fostering skills of calligraphic Arabic writing, which will be useful not only for children but for adults who have not gained proficiency in Arab language. The copybook contains translation and Russian transcription of all the used Arab words which are more than 100. Each page is devoted to a letter: on the top side its written forms are shown at the beginning, in the center and at the end of a word, and on the bottom side a training exercise is given.

The handwriting copybook needs to be opened from the end, because, being a true Arabic copybook, it begins where a Ukraine or Russian copybook would end.

The book for coloring “Arabic Alphabet” contains about 50 Arab words with Russian transcription and translation. When coloring joyful animals, little children will easily learn their Arab names but also memorize the letters of Arabic alphabet. A poster with Arabic alphabet is contained on the inside, which can be unfastened and hung up on the wall in a children’s room.

“Animals in Koran” is not just a book for coloring, but a book containing the animals referred to in the Holy Book. Apart from making the images colorful, children can do exciting tasks and learn how these animals are named in Arab language and in what surahs they are mentioned.

Also, this book for coloring is interesting because explanations and tasks in it are given in the two languages: Russian and Crimean Tatar.