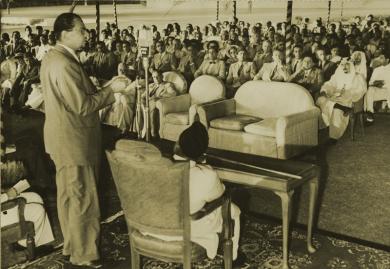 The International Scientific and Practical Conference “Significance of Scientific and Intellectual Legacy of Muhammad Asad in Rethinking of Important Problems of Contemporary Development” will be held on May, 16, 2013, in the conference hall of the Institute of Oil Transportation (address: 60, Artem str., Kyiv, Ukraine; registration at 9.30 a.m., opening at 10.00 a.m.)

The conference will gather well-known representatives from national science, education and culture, public administration, public and religious organizations, deputies of the Ukrainian parliament, foreign diplomats, guests from Europe and the Russian Federation.

The discussion will cover a broad range of issues devoted to the role and significance of ideas of this great resident of Lviv in analysis and understanding of relations between the West and the Islamic world, setting up the dialogue between civilizations and religions, positioning of Ukraine in these processes.

The moment of truth: adoption of Islam by this twenty six years old resident of Lviv

Muhammad Asad (real name Leopold Weis) is one of the greatest Muslim thinkers and activists. Born in Lviv, he was brought up and educated in non-Muslim environment. The moment of truth, changing his subsequent life, came when twenty six years old Leopold adopted Islam.

According to Mr. Murad Wilfrid Gofman, a well-known German diplomat and public activist, “Asad was a true gift of the past century Europe to the Islamic world”.