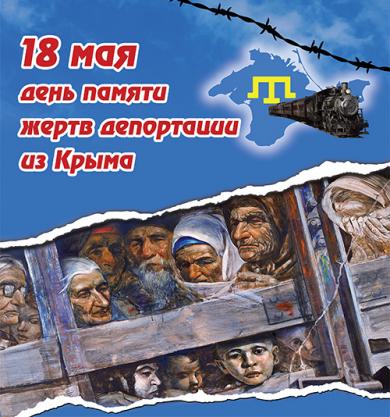 The mournful date of the next anniversary since deportation of Crimean Tatar people from their historical motherland is forthcoming. They had to live through terrible trials, but they could survive and preserve their culture, religion and great love to their native land.

Heroic struggle of Crimean Tatars for return to Crimea, in which this people and their leaders were showing the incredible fortitude was being on for several decades. In this struggle they were supported by best representatives of Ukrainian and other peoples of the former USSR and the global community.

Although much of the historical legacy of Crimean Tatars was destroyed, these unshaken people have taken on to restore cultural and religions objects and revive native language, culture and education.

Crimean Tatar people are facing tough problems now. They are, by far, related with the existence of forces striving to break the national unity. These forces have been attempting to spread distrust and clashes across the peninsula by establishing alternative religious and national & cultural centers. We, however, believe that our wise people shall preserve their spiritual and organizational unity, and shall have their rights re-established on the native land. In the meantime, the authority and the responsibility of the Crimean Tatar people’s Mejlis will help them in making right steps on the way to prosperity and consolidation of social and political stability in Crimea.

We are telling our Crimean Tatar brothers that in us you will have loyal friends.

We are asking Allah the Most High to bless you, Crimean Tatar people, and support your establishment and consolidation on your native land after the hard years of deportation! May Allah give you patience in facing the challenges of today, and may He give you inexhaustible energies in the cause of revival of your religion, cultural, language and traditions.

May the Lord guide us to the light and ease the path leading to His pleasure!