In memory of Mr. Mais Batalov, a founder of the religious community of Muslims in Odessa 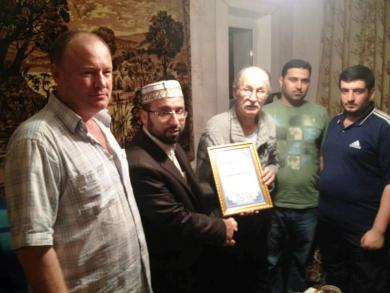 In memory of Mr. Mais Batalov, a founder of the religious community of Muslims in Odessa

Mais Rahimovich Batalov passed away on May 15, 2013. He was a founder of thereligious community of Muslims in Odessa, chairman of the Association of Tatar and Bashkir Cultures, a retired colonel.

The All-Ukrainian Association of Social Organizations “Alraid”, the Religious Administration of Muslims of Ukraine “Ummah”, the Public Organization “Al-Masar” and Muslims from Odessa express sincere condolences to the near and dear of the dead.

The Messenger of the Most High (may be peace and blessings upon him) said: “When a man dies, all his deeds end, save for three ones. They are unending alms, learning that brings benefits to people, and righteous children turning to Allah with supplication for him”.

The Most High allowed Mais Rahimovich to pass 80 years age prior to taking him from this worldly life; because the time granted to him in this life was seen by him as a great value, he left much beneficial knowledge and learning after him, being an active participant in revival of Islamic culture in his native city and a promoter of Muslim education.

Muhammad (may be peace and blessings upon him) spoke about patience to be shown by relatives of the dead: “When a slave of Allah is afflicted by adversity and says: ‘Indeed, to Allah we belong and to Him we return; o God, reward me in my adversity and give me something better in change’, Allah shall reward him in his adversity and give him something better in change”, and also: “Allah the Most High says: ‘When I take a close friend from My believer, and he bears the loss without complaint, his reward from Me will be only Paradise’”.

Indeed, to Allah belongs everything that He has taken and everything that He has granted, and for everything He fixed its term. We are asking the Most High to forgive the dead all his sins and errors made out of momentary weaknesses or out of mistakes, to grant him a great reward for his good deeds, to save him from torments in the grave and Hell, and to make him one from among those receiving good news of Paradise in Judgment Day.

The Religious Administration of Muslims of Ukraine “Ummah”