Statement on the occasion of violent attack in Boston 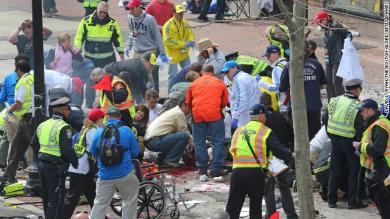 Statement on the occasion of violent attack in Boston

On April 15, 2013, two bombs exploded at the finish line of the popular international marathon in Boston. Three were dead (of which one was an eight years boy), and 183 persons were more or less severely wounded.

On behalf of the Ukrainian Muslims, we are expressing our sincere condolences to the relatives of the dead and all who suffered from physical or mental injuries in this inhuman attack on peaceful people. Whoever may stand behind this crime, we wrathfully condemn such acts. Killing of innocent people is absolutely forbidden in Islam, a religion of peace, justice and goodness.

Blasts in the crowd of fans welcoming the winners have split the society once again, as some people began  to call “by inertia” to public ostracism of Muslims and their expulsion from the country. It’sdistressing. Many Muslims are born in the U.S., live there and work hard for the good of the American society. They love this country, and they are ready to defend it.

The American public has been stirred by wave of indignation; Mr. Erick Rash, news broadcaster from Fox News channel, who dared to speak in aggressive manner against the followers of Islam, had to tender a public apology. It’s comforting that calls to violence were rebuffed by various groups of people irrespective of nationality or confession. The global community is becoming aware that terrorism, like any other crime, has neither nationality nor religion.

Regrettably, there’re journalists who disseminate rumors or inventions of the kind before the end of investigation, conclusions of public officials and criminalists. If even a crime proves to be committed by persons claiming to belong to our faith, it does not mean that such acts are permitted or encouraged by Islam. Instead, The Most High likens unlawful killing of one person to killing of the whole mankind (see Koran, 5:32).

Even in Kabul, the capital of a country devastated by the war broken out by the U.S., local Muslims have been rallying to express support and condolences to the victims of this violent attack and their families. Having witnessed the war and ruining, they really know about the loss of near and dear; they can understand the pain of the ones who suffered in this barbarous attack better than anyone else. We wish speedy healing of physical and emotional trauma to the victims, and their near and dear we wish patience and understanding.  Those who lived through this horror need to learn to live with it, to adapt and to suppress (to fight) the fear firmly established in the heart, which is the fear of crowd, the fear of facing the like ever again.

We hope for objective investigation into the incident and punishment of real perpetrators of this tragedy strictly in keeping with the law, no matter what religion they may claim to follow.

We supplicate to the Most High asking Him to inspire wisdom and patience in all the people with whom we are going to live side by side on this Earth in spite of differences in the appearance, beliefs or preferences. May God grant us the learning to resolve the forthcoming problems and disagreements in a fair and peaceful manner.