Young Muslims from Kharkov learn to give emergency medical aid 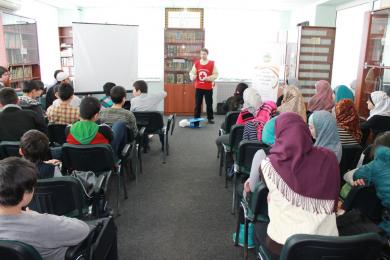 Young Muslims from Kharkov learn to give emergency medical aid

It was on March 24, 2013 that Muslim teenagers visited a master class on emergency medical aid to persons injured in various daily situations, organized in the Islamic Cultural Center of Kharkov.

Competencies and experiences in the field were informed by a lecturer from the Kharkov regional organization of the Ukrainian Red Cross, invited by the Public Organization “Al-Manar”. It should be noted that female activists from “Al-Manar” had earlier visited the Kharkov unit of Red Cross with similar purpose.

Once the training started, the lecturer demonstrated teenagers a video clip about operation of the International Movement of Red Cross and Red Crescent, which renders humanitarian aid to the needy across the globe.

He says that nobody can be careless to the ones who need help, and everyone should show sympathy and humanity to the surrounding people.

The visit of a lecturer from the Kharkov regional organization of the Ukrainian Red Cross made young Muslims perfectly feel the importance of cooperation with organizations like this for the sake of unity of the humankind, peaceful coexistence and striving for good actions.

The more people would abandon carelessness and turn to problems and needs of the surrounding ones, the sooner we will live in the community where each one will be more loving, merciful, peaceful and faithful to God, as mercy is a quality pleasing Allah. The Prophet Muhammad said: “Be merciful to the ones who are on the earth and you will be forgiven by the One Who is in Heaven”.

The information was treated by the trainees very seriously in spite of their young age. Because it was interesting for them to learn how the acquired skills could be practically used, the lecturer demonstrated the situations he had referred to and methods for emergency aid on a special dummy and volunteers from among the trainees.

Hope that nobody of them will have to apply the acquired skills, God grant. Yet, it’s better for all when there will be someone in a crowd with the required skills, as quite often human health and even life depends on timeliness of emergency aid.