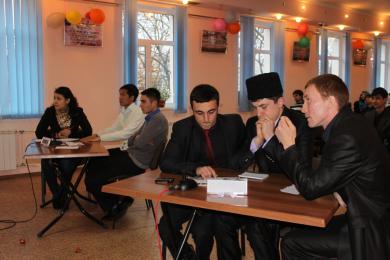 It was on March 26 2013 that “Emel” launched a novel intellectual game for the Crimean Tatar youth, as the first game of its new project, the intellectual contest “Ilmiy kuresh” (“Brain ring”), was organized. This event evoked great interest of Simferopol youth, as nearly eighty young men and ladies came that night.

Apart from traditionally difficult tasks for rival teams, the game involved entertainment for the audience. At each of the three rounds of the contest, the teams had to answer questions in the six subject categories proposed by organizers: “Crimea”, “Islam”, “History”, “Geography”, Ottoman Empire”, and “miscellanea”.

Audience also can boast of erudition

The two teams competed this time: members of “Yashlar shurasy” organization and students from the Crimean Engineering and Pedagogical University

In each round the rivals had to choose the category and answer three questions contained in it. One minute was given for thinking about the answer; if neither of the teams would articulate the right answer, it would go to the audience.

Meanwhile, the audience had much to entertain with, as in round breaks they could listen to jokes of mediators and Crimean Tatar folk songs performed by 13years old Ramazan Zakirov. In addition, a quiz with souvenirs was arranged for the audience.

Three scores gap: the intrigue kept till the end

Summing up, the winner was the team “Yashlar Shurasy” which had only three scores to leave the rivals behind. Mr. Muslim Dervishev, “Emel” chairman, thanked participants and the audience alike and gave both teams the awards.

He sums up: “It was long ago that we planned to arrange this event where the audience and the participants alike could learn more about their history, traditions and faith in game format.  Hope this project will be interesting for youth in future”.