Discussing new strategic plan at the general meeting of “Alraid” 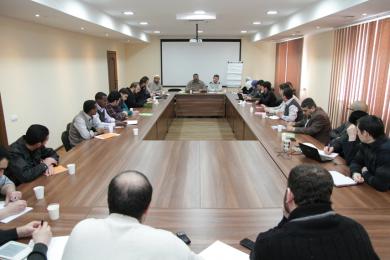 It was last weekend that the All-Ukrainian Association of Public Organizations “Alraid” held the next annual general meeting in the central office in Kiev. Not all representatives from member organizations could arrive in Kiev due to the rough weather and heavy snow that struck Ukraine, but the conference hall of the Kiev Islamic Centre could nevertheless gather 40 people.

The main item in the schedule was to introduce the audience to the new strategic plan for 2013-2014 and discuss in detail various aspects of work at department level. Summing up the meeting, the delegates adopted a resolution.

The first part of the meeting was devoted to detailed discussion of strategic objectives set up by departments and committees of member organizations.

Mr. Bassil Mareei, “Alraid” chairman, highlighted problems and barriers that occurred last year.  He also focused participants’ attention on the need to be guided by principles of moderateness and tolerance in Islam, and pointed out that they constituted the spiritual foundation of “Alraid”. When these principles are followed, the Most High facilitates one’s action and implementation of one’s goals.

Also, Mr. Bassil Mareei put emphasis on the need to observe basic principles of “Alraid”, and referred them to as the stronghold for unity and strength, as genuine qualities that distinguish “Alraid” from other public organizations.

The practical part of the meeting was focused on search for decisions of already existing problems, predictions of potential barriers in implementing the approved plans and programs, and ways to overcome them. Also, practical issues related with organization of events were discussed.

Do not give way to provocations and aspire to unity

This meeting was one of the few where training seminars on public relations were organized for “Alraid” members. Subject to separate discussion were important issues of filing and circulation of documents and communication of information. “Alraid” should never have mistakes when it comes to filing of the required documents; it must not surrender to various kinds of provocations and invectives against Islam, Muslims or the Association as such.

In the final communication the participants called Ukrainian Muslims to unity on the basis of the commonly adopted principles, keeping away from discord in issues where several opinions are admitted and consolidation of their societal role.

The delegates spoke out solidarity with peoples of Syria and Myanmar fighting for freedom, and made emphasis on the antihuman nature of blood shedding actions of their regimes.