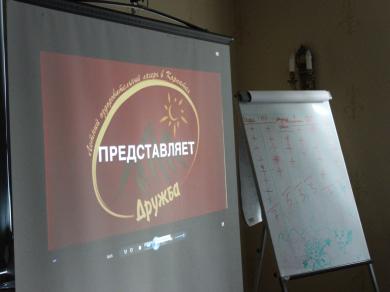 Unexpected autocriticism was the general concept of a short movie contest held at children’s summer camp “Druzhba” (Ukr. “Friendship”). The kids have to come up with their ideas for short movies; they wrote their scripts, invited their friends as actors, filmed and assembled the whole thing. Everything was made with just smartphones on hand, for there are many applications for editing videos.

The only condition was that the video should have some insightful meaning. This is where the young script writers and directors really surprised the camp counselors, for they depicted typical mistakes that they had themselves, both mistakes in their religious practices and ill-starred communication patterns with their peers. The children were thinking outside the box, cooperated with one another and filmed the same scene from different angles for having more interesting cuts - as adult filmmakers did.

Senior participants impressed the jury with their video editing skills and sound effects, while the juniors showed good drama and strong acting skills.

The teachers believe that there’s a huge potential in that, for in the age where plenty of teens have their own vlogs on the social media, such videos (and they’ve already uploaded their works online) have the potential of dispelling long-term myths and negative stereotypes about Islam and Muslims among the youth, that won’t have any problem of finding common grounds with people of different religions and cultures when grown up. Thus, this is a powerful tool  for boosting cohesion and mutual respect in the Ukrainian society.