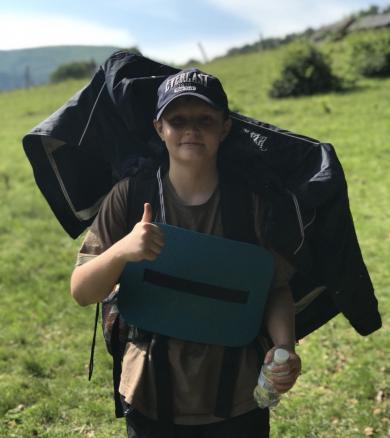 It’s been five days since this year’s Teenage Scouting Camp went backpacking to the Carpathians, and participants of the previous scoutings are clearly visible among the freshmen (this year, the number of participants almost doubled, and many of them came from the Ukrainian cities other that Kyiv): they are more disciplined and better at following instructions. But the boys (their age varies between 12 and 17) eagerly share their experience, and are good role models for them.

This year, due to numerous requests from the participants of the previous camp-2017, the encamping will be done twice. Tha, of course, shortens the overall distance they’ll cover, but on the other hand allows a better practice of survival skills, like choosing the place for the camp, setting the tent, lighting a campfire, cooking over an open fire, etc. Today, the young men are to conquer a mountain, where they are to get a vitamin bonus: picking and eating berries.

In their backpack lie only bare essentials: a sleeping pad, a sitting pad, a safety bowl and a safety cup, water bottle, utensils, a folding pocket knife, a change of clothes, socks, undergarments and footwear, hygiene products and a raincoat. And, of course, a stock of provision one person: each one is responsible for carrying his own stock of food.

Last year, having walked and climbed enough and gaining blisters,many boys said upon returning home they would never sign up for something like that again, no way, but… But they changed their mind in less than a week, when the weariness was gone, leaving them with only bright memories. At that very moment they started asking their parents to sign them up for the next backpacking tour!