Seyran Aryfov on His First Year as Head of Alraid: New Experience, Reappraisals and Gap Analysis 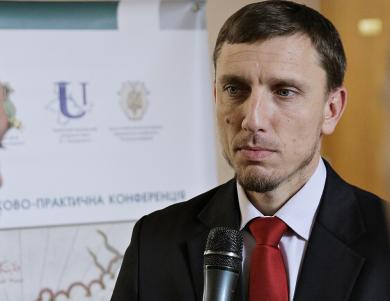 All-Ukrainian Association “Alraid” started the previous year of 2017 with the regular election of the Head, the Executive Committee and the Review Board.

Seyran Aryfov shares how his perception of CSUAUA “Alraid” had changed after spending one year as its Head, how the employment issues are solved, and also speaks about the experience he’s gained, hardships, lessons learned, and plans for the future.

What has changed for you personally as the Head of “Alraid” over the past year?

Since it’s my first term in this office, I’d rather speak about learning a lot of new instead of change. I have to learn a lot of things from the scratch. I used to be a member of the Executive Committee and the Review Board, I even spent some time performing as Deputy Head, but that was completely different.

It’s one thing to observe it all from the outside, but it’s totally different when you are in charge. As an outsider, you see the organisation as … well, an organisation, but since you’re responsible for it, wou start to realize that people are the most important. You feel the need to become more critical, maybe rougher, start seeing things from rather professional that individual perspective.

On the other hand, I still do my best to maintain a friendly environment for our co-workers and member-organisations.

Did some of your colleagues surprise you to the upside, or, on the contrary, knock you back on your heels?

Both, yet there were more welcome surprises. I would say it wasn’t about surprising me, actually, but… something we did was successful, something was unsuccessful, we’ve made our mistakes… But I believe we mustn’t take that too personally, for it’s not about someone being good or bad, it’s about all of us having our  strengths and weaknesses. That is the experience I believe we have to have no issue with, for it provides us with job rotation.

I have the freedom to appoint heads of departments, not to mention a Head’s weaknesses (given that their other characteristics make them suitable for the position) can be enforced by appointing a deputy Head. Overall, our work is successful by 70-80%.

In your view, what was the main lesson you’ve learned from your job in 2017?

My most important lesson was that assigning tasks, as the boss, is not enough. I can’t just assign tasks, designate individuals responsible for them, and then just sit and wait. It occured  that constant involvement in every departments and organisation is important, same as being close to their day-to-day work.

Of course, I must by no means interfere in every single process, but still came out of the blue that my job wasn’t about “being bossy with the bosses”, but about going into details, know every department’s work, every project, and perhaps sometimes interfere, control or extend a helping hand. I have to deal with day-to-day work.

Speaking about the Association at large, what, in your view, was its greatest achievement in 2017?

In my opinion, saying that we are working on the long-term goals, for big achievements do not happen every day, you need time for implementing each of them.

Speaking about the achievements of 2017, I want to mention the opening of a branch of Gymnasium “Our Future” in Kharkiv. Yet in early 2017, we’ve set our strategic goals not for one year, but for the next four years, and we still have three years to find a separate building for the Kyiv branch of “Our Future”, and also to open another branch in Odesa.

Besides, each of our department carries out its daily work and holds its regular events - with changes, of course, but it is still important that all those routines were done properly and on time.

Every organisation faces hardships in its work. What was the biggest travail for “Alraid” in the year that has passed?

Our greatest hardships didn’t depend on us, and they began in 2014? Njt in 2017. We still face the consequences of Crimea’s annexation and outbreak of war in Donbas. It all had a great impact on our work, for we’ve not just lost connection with the three regions, namely Donetsk, Luhansk and Crimea, and lost a great deal of our work, but we also faced the need to help the internally displaced persons, and our army…

And, of course, events in the Muslim countries also had their impact on us, in financing first of all.

Still it doesn’t mean that we gave up or are planning to decrease our work, not at all! We just have to work harder to decrease the losses from the named processes. We can’t influence those processes, and they did much more harm than just that for our organisation, unfortunately.

You were speaking of the long-term plans and goals… Is there something you didn’t put on the list of goals for it looked more like a dream and you didn’t know where to start, but still you wish for it to come true?

Hm, dreams… It’s hard to name one thing. I believe it’s not the goals for our organisation only, but rather for the whole Ukrainian Muslim community, for all the Muslim unions in our country… Developing Muslim-friendly infrastructure in various spheres, like Muslim banking or Muslim hospitals… I want to stress that by saying this I do not mean that those should be banks or hospitals working strictly for and with Muslims, no! They will be open for everyone, but still They’ll be taking account of Muslim cultural and social norms.

It would be great to have an Islamic University, where future qualified theological scholars would be educated.

To open some network of recreation and leisure centres, some places for families, for Muslim youth, where they would unite around their hobbies and sports; a network of kindergartens… some specialized social organisations, cultural events…

I believe that all that will not just improve the Ukrainian Muslims’ living standards, but in the end play a positive role for overall Ukrainian society, promote positive change in the country and in the society if various spheres. It would be a great input, and the task is too big for any organisation alone. Yet we are open for cooperation with other “dreamers” just like us!

Looking back, were there some situations where you thought “I’ll try a better solution the next time”?

That mostly apples to some day-by-day situations, not something global.

Still, from my own experience, I would say that in the future we must make very detailed agreements when working with some other organisations on our joint projects. The agreements have to be really detailed so that everyone knew intimately their responsibilities, and contain some “plan B” just in case that something goes wrong or the circumstances change dramatically. It’d be great to have a ready Plan B which everyone agreed with earlier, and start acting fast instead of gathering in some stressful situation and trying to work out that plan B on the spot.

We’ve had several incidents where we had to figure out the Plan B in a great fuss and buzz, and since we all are just humans and can’t control many factors, we must think of it while drawing the original agreements.