Another “Be a Donor!” Benefit: 9 Litres of Blood and UAH 1,892 for an Orphan’s Rehabilitation 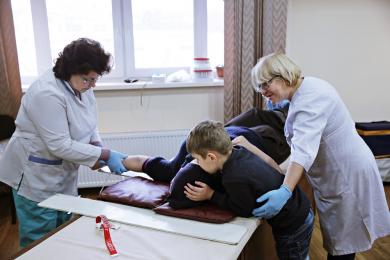 Unpaid blood donation benefit on 29 December 2017 at Kyiv Islamic Cultural Centre started with emoin, for many of those planning to attend bitterly regretted to inform that they’d caught a cold ar had other medical conditions temporarily disqualifying them as blood donors…

Still, the fears were baseless, for, after all, 20 persons did donate their blood, with another 6 disqualified after the express blood test due to their low hemoglobin. As the closing hour approached, the tension increased: people who wanted to participate, but got stuck either at work or in a traffic jam worried that they wouldn’t make it to the ICC on time. Jet they did, and everyone who rushed in order to share their blood, did just that.

The donors summarized their 2017 with not one, but two good deeds: together they’ve collected UAH 1,892 for a disabled child’s rehabilitation.

Permanent panellists of “Be a Donor!” Benefits are familiar with the “Sadaqa” donation box, where people who do not wish to take even the lunch compensation can drop that money. The project promotes unpaid blood donation, so every participant is aware in advance that there will be payment for their blood, but still the medical crew is obliged by the law to compensate the lunch costs, with the donor’s with signature confirmation. Today, that compensation if UAH 73. Those of the blood donors, who both wished and could to also donate that money, dropped it in the box. Moreover, some people who couldn’t donate blood attended the benefit just to make their input in the donation box!

Overall, they’ve donated UAH 1,292. Another UAH 600 were added to that sum from the money remaining from the previous benefit, making the total sum for little Eugene’s rehabilitation UAH 1,292.

UAH 1,292 covers ⅔ of the boy’s nearest rehabilitation course (about UAH 3,000) at Bersenev Medical Centre. A thousand thanks to everyone who joined the fundraiser!

7 year old Eugene’s (infantile cerebral paralysis) life has never been easy: being rejected and left at the orphanage as a baby (because of his diagnosis), the boy could never have felt the joy of doing simple everyday things on his own. Even eating with a spoon, an easy task for a child of his age, was a great achievement for him, which became possible last summer, after another rehabilitation course and several months of persistent exercising; thanks to the help of non-indifferent people who raise funds for him and take care of his rehabilitation. The child learned how to walk with rollers about 1.5 years ago, and has been rolling around the orphanage’s yard ever since then.

Recently, on 7 December, Eugene underwent a serious surgery on his joints an Kyiv Orthopaedics Institute (6th Clinic, Children’s and Teenager’s Arthropathy Department), and his rehabilitation is about to continue in early 2018.