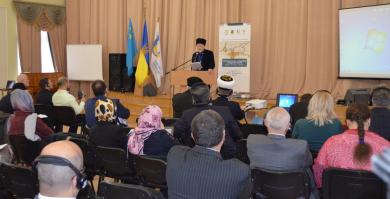 The event that gathered researchers from both all over Ukraine and abroad (Belarus, Turkey, Moldova and Azerbaijan) on 14 December in Kyiv, was International Research-to-Practice Conference “Muslim Heritage in Southern Ukraine: History, Culture and Religion”.

Most of the foreign guests arrived from Turkey, and brought their interesting reports based on their groundwork in Turkish archives. It is common knowledge that the Crimean Khanate used to be in  Ottoman Empire’s vassalage; Ottoman Sultans even participated in electing the next Khan (of course, the selection range was limited to one family, the Giray). Still the very first contributor, Professor Mehmet Maksudoglu (who taught at various Universities around the world) cast discredit on the very term “Ottoman Empire”, for almost 50 years of research have turned the world famous historian and Arab philologist to thinking that the wrong term was used due to the lack of possibility to give adequate interpretation of the country’s title “Ottoman State”, which is the closest translation possible.

— It all begins with a name: once you’ve changed someone’s name, the perception is different. [...] We see the title “Ottoman Empire” in the literature, even in the textbooks! For instance, when I was a student, every book read “Ottoman Empire”. Yet I’ve got my degree, and, upon closer examination, saw that absolute lie! In then Ottoman Turkish, the state was called “The Glorious and Splendid Sultanate of Ottomans”, and it terms of European traditional naming one would better use “Ottoman State”. See the hundreds and thousands Ottoman documents of that period — that is the only title you’ll find. But in 1856, with international document flow (mostly in French), the correspondence in French used the French term “Ottoman Empire”, while the internal documents kept using the “Ottoman State”, up to Ataturk’s coup.

Thus, the researcher believes that using the term “Ottoman Empire” is incorrect, for it didn’t have such necessary indications of an Empire as exploitation of colonies. That had rather been a policy of protection and guardianship of Muslims all over the world and justice for non-Muslims.

Another stereotype was dispelled by Turkish researcher Firat Yasha in his work “Desired or undesired:  narratives of reversion to Islam in XVII century Crimea”. Contrary to the popular myth that non-Muslims converted to Islam due to violations or their religious rights in the Khanate, the researcher, quoting the historical documents, told that people of other faiths had their own religious courts, and their own religious traditions defined the marital relations, inheritance, property, etc.

As for the new Muslims, it needs mentioning that besides the testament of faith (the shahada), they usually had to take certain steps towards changing their lifestyle. As a rule, in order to keep religious zoning of the neighbourhoods (for each neighbourhood was designed to fulfill the needs of certain religious community in the best way possible), the new Muslims sold their homes to someone from among their formed adherents, and bought a new home in Muslim neighbourhood. There are many records of such dealings. Still, there was one peculiarity: if a married woman converted to islam, her marriage was “put on hold” intil her husband decided is he was willing to convert as well. If he wasn’t, then their marriage was judicially dissolved due to the contemporary understanding of the rule “a Muslim woman can’t marry a non-Muslim man”. At the same time, there is a court ruling dated by late XVIII century, where a girl who was raised in a Muslim family since she had been 7 proclaimed herself a non-Muslim, and married a non-Muslim man. The case was brought to the court by her family, and she was offered to revert to Islam, and, after she refused, the judge found no reasons for dissolving her marriage.

There was yet another peculiarity of new Muslims: after the peninsula was conquered by the Russian Empire, most of the new Muslims wanted to change their names to Tatar names as fast as possible, so that they wouldn’t be automatically be prescribed to some parish of the Russian Church due to their “Christian-sounding names”.

Researcher Emel Kilic in her report “From trade to religious incitements: merchants-missionaries in XIII-XV century Crimea” spoke about close connections between the arrival of non-Muslim merchant who later became residents, and the arrival of missionaries of their religions. For instance, few are aware that Catholic missions operated in Crimea in olden times, and those missions (officially approved on the highest level by Khan Uzbek himself) started with settlements of Italian merchants who had their businesses going in Crimea.

The same story was with Armenian Apostolic Church and even Jewish missions, who also came with Armenian and Jewish merchants. In fact, the religious variety of the peninsula influenced different spheres of life and art (from architecture to literature).

Grigorii Mavrov, a researcher from Istanbul, in his report “Shahin Giray as the first experience of modernization in Islamic world” spoke about the attempt to reform the Crimean Khanate, that ended us with riot and annexation of the Crimean peninsula by Russian Empire.

In order to help his audience better beel the mood of late XVIII century Crimea, mr.Mavrov started his presentation with a quote by Mustapha III, an Ottoman Sultan, who wrote: “The world turned upside down, and there is no hope for the better during our rule. Ill fate gave the power to the hands of of unworthy people; our statesmen are thieves scuttling through Istanbul streets, and we can do nothing about it but pray for God’s mercy,”  — and he was the ruler of one of the greatest states in the world that held sway over lands on three continents!

Crimean Khan Shahin Giray was pretty much the first Muslim ruler who launched modernisation. Still, the historical records know him as a looser modernizer. From a young age he traveled to and lived in several countries that belonged to the European Civilization, and witnessed the West growing stronger. He tried to understand why that happened, and borrow the experience and practices that made the Western countries stronger. So what were his reforms about? First of all, he wanted to change the political regimen and establish the absolute powers of the Khan. Earlier Khans never had such power, for they were elected by the tribes, and their ruling was based on the consensus of those tribes. Even the Ottoman Sultans had their word in the election process, for the Crimean Khanate used to be in  Ottoman Empire’s vassalage; of course, the selection range was limited to one family, the Giray.

Shahin Giray tried to seise that function and make his exclusive choice of the next Khan. He launched other scale reforms, as well, in particular reform of the Divan (then-Cabinet of Ministers) which was often used as means of pressure upon the Khan. Shahin Geray tried to make members of Divan ordinary public servants invited by him personally.

Other reforms included administrative reform (removing most of the lands from the tribal influence), fiscal (strict reporting on collected taxes), financial (started a new mint with contemporary equipment he bought in Poland), and serious military reform, for the State started unprecedented procurements of contemporary foreign arms which were earlier available only as trophies, involved foreign specialists in training the new soldiers, and introduced mobilization of peasants, even non-Muslims! In order to implement those reforms, one needed to know how much citizens they had, so the first ever population census was carried out in Crimea. Needless to mention that the general population wasn’t very excited about all that.

The Khan also had big plans for modernization of seaports and erecting manufactures and plants. Another change likely inspired by Peter I of Russia was transferring the capital (from Bakhchisaray to Qafa, modern Feodosia, and building there a contemporary European style palace. To implement that, he invited foreign specialists, first of all Englishmen.

We can’t tell what those reforms would have resulted in, for there was a great riot resulting in the Khan’s disthroning. He returned in a rather short period of time,at the point of the Russian bayonets, but that didn’t last long, for Russia decided to bring the experiment to the end and annexed the Crimean Khanate.

Other Turkish participants made their presentation at the Conference as well, namely “Ukrainian-born Ottoman Reformist Alemdar Mustafa Bairaktar” by Ali Nuriev and “Ukraine-Turkey relations” by Buraq Chakyshkan.

Noteworthy,  the event was organized and held by Ukrainian Centre for Islamic Studies, Centre of Islamic Studies of the National University “Ostroh Academy”, CSUAUA “Alraid” and Volodymyr Vernadskii Tavrian National University. The Conference was moderated by Mykhailo Yakubovych, the famous Ukrainian historian, orientalist and translator (and also the author of full Ukrainian translation of the meanings of the Holy Qur’an).