Moral Example of the Prophet and Jerusalem’s Past and Present: Tarik Sarhan’s Seminar in Zaporizhzhia 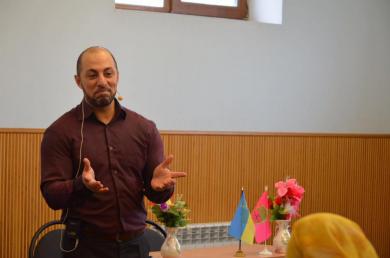 Moral Example of the Prophet and Jerusalem’s Past and Present: Tarik Sarhan’s Seminar in Zaporizhzhia

On Saturday, 9 December, Zaporizhzhia Muslims gathered at the local Islamic Cultural Centre “Vira” (Ukr. “Faith”), for Mr.Tariq Sarhan (Head of the SCUAUA “Alraid” Department of Introducing Islam and Muslim Culture) had prepared several lectures for them on the occasion of the continuing month of birth of Prophet Muhammad, peace and blessings be upon him — Rabbi ul’Awwal.

Speaking about the mission of the God’s Final Messenger, the guest from Kyiv couldn’t fail to mention Jerusalem where Muhammad, peace and blessings be upon him, had been transferred one night to take the lead in the joint prayer of all the prophets who ever liver, and then to be translated into Heaven where he had become one of the few people in history to speak to God directly.

Needless to mention how painful it is for Muslims to hear all that news about limitation on access to one of the three Islamic Holy Sites, which is the Al-Aqsa Mosque. Especially now, when the US President Donald Trump has declared his intention to transfer the US embassy to Jerusalem, virtually recognizing the occupied city as the land that belongs to Israel. This news is especially painful for the Ukrainian Muslims, who know firsthand how it hurts when your land is occupied by the aggressive neighbour, and the international or foreign institution seem to support the occupation by any means.

By the end of the meeting, Mr.Sarhan stressed that it was the holding onto Qur’an and Sunnah that would guarantee safety and freshness of the shadow on the Day of Judgement, when it will be extremely hot; and the importance of adhering to those rulings by deed, not by word, sincerely and frankly.