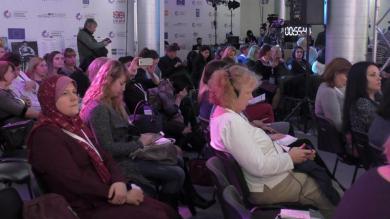 Ms.Olha Fryndak, a representative of Women’s Social organisation “Maryam”, participated in I Ukrainian Women’s Congress held in Kyiv on 22-23 November.

300 participants, 50 top speakers, 7 discussional platforms — everything aimed at uniting the most active men and women from politics, business, Media and NGOs on the base of promoting gender equality in different spheres of Ukrainian social life as the basic element of sustainable development of Ukraine.

The next great goal to achieve is creating a public platform for forming the agenda on gender policy for the Parliament and the Government, as well as for the social, private and media sectors.

The discussions were about reinforcing women’s public and political activities, widening their economical prospects, involving women in peacemaking processes and security sector, combating gender-based violence and stereotypes, and improving education on gender.

The participants also discussed the lack of women’s involvement  in decision-making, gender-based service limitations, and widening the range of duties available for women in the armed forces. They also raised the issue of ratification of the Istanbul Convention, and busted some myths on that document, namely, they stressed the importance of studying international experience on gender-based violence in order to develop recommendations for Ukraine and define the action plan.