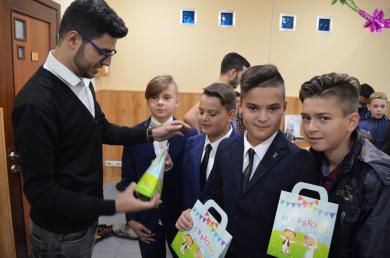 “How does it make you feel to see so many people who attended the festive prayer today?” asked one of the journalists interviewing Mufti of RAMU “Umma” Said Ismagilov. “I feel joy, for people are returning to religious practices after long soviet period of underground religious life. People not only come, more and more of them each year, but they bring along their children,” the Mufti answered.

Despite the fact that this year the Holiday occurred on 1 September overlapping the opening of academical year, and many parishioners were absent because of having to bring their little ones for their first day at school, “Alraid” Islamic Cultural Centres were overcrowded.

At Kyiv ICC, about 4,000 believers joined the festive prayer, after which they found treats, sort tournaments, a fair where handmade, natural cosmetics, accessories and stylish clothes at their disposal, while the kids enjoyed quizzes, festive concert, cotton candies, bouncy castles, face painting, science show and gifts. And, of course, the puppet show for the smallest ones!

In Zaporizhzhia, over 200 believers attended the local ICC, with a photo exhibition, mount of literature, quizzes for everyone and gifts for the kids awaiting for them after the festive prayer was over.

In Vinnytsia, the festive prayer united about 300 believers. There was a mistake in the announcement: animators and gifts were to be delivered to a children’s oncology ward, not an orphanage. Little Muslims also enjoyed treats and playing with animators.

At Kharkiv ICC, over 400 people attended the feast. And while they had to replace bouncy castles with  additional animators’ show, nobody was sad about it: children played, quickly picked their gifts and, of course, didn’t fail to attend the sweet buffet.

In Sumy, a sweet buffet was awaiting the believers after the prayer, while their kids enjoyed quizzes and gifts.

In Lviv about 300 people attended the festive prayer, after which everybody enjoyed the treats and the children also had fun in the bouncy castle. They also prepared gifts for the kids to be presented on the following day, which included learning games like “Young Chemist”, “Young Mechanic”, etc. Besides, ICC’s Administration and parishioners were invited to attend the feast on Monday, 4 September, organised at Bohdan Khmelnytskyi city park by Crimean Tatars supported by their adherents from Turkey and Germany.

At Odesa ICC, about 700 believers came to join the feast. After the prayer children enjoyed a special programme with animators, sweets, gifts and, of course, sweet buffet for everyone.

In Dnipro, where the local ICC hosted about 200 prayers, the children found gifts, quizzes, contests and face painting after the festive prayer was over. And, of course, cotton candies (video) for everyone, in addition to traditional sweet buffet. Besides, Edgar Devliqamov, the local imam, received greetings from state officials congratulating Dnipro Muslims upon the great Holiday of Eid.