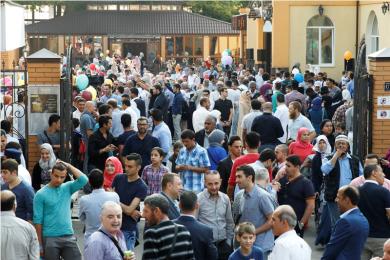 Today,Muslims from all over the world celebrate one of the two major Islamic holidays - Kurban Bayram (Eid al-Adha). On the territory, controlled by Ukraine, Islamic cultural centres had more than six thousand parishioners and guests. How have we celebrated it in different cities?

Early in the morning, about two and a half thousand believers visited the Kyiv ICC to perform together the Eid prayer. Indeed, holiday has brought together all: Ukrainian Muslims and guests of the country, Kyiv citizens, and residents of other regions, even non-Muslims who have come to congratulate their friends and fellow Muslims, and at the same time to see the feast celebrating.

Eskander Beriev, the representative of the Majlis of the Crimean Tatar people, has come to share the joy of this bright day with his co-religionists.

After the Eid prayer, pupils of the gymnasium "Our Future" congratulated all those comers with poems and songs performed in different languages. The children also had the opportunity to watch chemical experiments. When thetrampoline had been inflated in the Centre backyard, the children moved with pleasure from the scene to the inflatable slides.

The distribution of sacrificial meat will begin at 18:00 on September 13.

About 400 people came to the Dnipro ICC to the Eid prayer. At 17:00, the Muslim community of the city will gather to celebrate this day, so they invite the citizens to join them in the park of Lazarus Globa. The program includes the presentations of Muslim communities’ and Diasporas’ representatives, competitions, workshops, exhibition of paintings, dedicated to the Islamic culture, the Crimean Tatar pilaf andmuch more. Free rides, fun games, competitions with animators, sweets are prepared for children.

The distribution of sacrificial meat is scheduled on 13, 14 and 15 of September.

Approximately four hundred parishioners gathered in the city ICC today. After the Eid prayer and having treats, believers took a break, waiting for little Muslims to come from the school, so they could continue the celebration with their families.

In addition to entertainment programs for children, local Crimean Tatar community has prepared the traditional dishes and sweets to treat the visitors of the Centre.

The distribution of sacrificial meat will begin in the evening.

This year, theEid al-Adha is remarkable by the fact that, in addition to the Muslims, living in the city, the Islamic Cultural Centre of Muhammad al-Assad received the visitors from other countries, who were arranging their vacations at the nearby resorts. The biggest group of tourists was from Truskavets.

This morningabout a thousand faithful performed Eid prayer together in Kharkiv, after which the program included treats for all those comers. The children were entertained with a shooting gallery, rides, trampolines, face-paintings and cotton candy.

The distribution of sacrificial meat will begin today at 21:00.

Almost three hundred people have attended the Eid prayers at the Zaporizhzhya ICC. Children traditionally receivedgifts. The refreshmentswere prepared for all visitors.

The first distribution of sacrificial meat is already planned for this evening.

More than seven hundred people attended the Eid prayer. After that, Muslims and the mosque visitors were invited to tables with sweets. The entertainment program was prepared for children, including games, contests with animators and gifts (sweets and toys).

The distribution of sacrificial meats will start at 17:00.

The newly opened Sumy ICC received three hundred faithful, gathered for Eid prayers. Gifts, quiz and soap bubbles show were prepared for children after the prayers. By the way, this show was appreciated by adults as much as by kids.

The sacrificial slaughter of animals and the distribution of the meat will becarriedoutprivately.

About 450 believers shared the joy of the holiday in Vinnytsia. After the Eid prayer, the children received sweet gifts.

The distribution of sacrificial meat will begin in the evening.