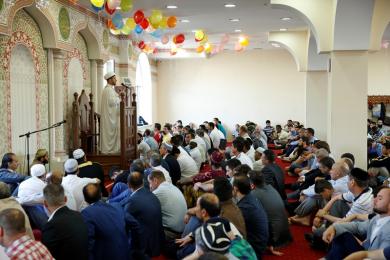 Today the doors of Islamic centers "Alraid" were wide open: Muslims were in a hurry to make the morning Eid prayer, to congratulate the coreligionists on the blessed Eid al-Fitr (Eid al-Fitr, Ramadan Bairam, Marhash) and to share their joy with others.

About 2,200 people came to the Kyiv ICC for eid prayer. Mustafa Dzhemilev, who also took part in the prayer, shared his impressions about the holiday and sorrows over the terrorist attack in Medina:

"We appreciate "Alraid" of the organization of this festival. "Alraid" is the main pillar of Islam here in Kyiv and in whole Ukraine. I would like to wish our fellow believers to be Muslims primarily in their souls, because Islam is not only ceremonies, the five-time prayers, but, above all, it is the spiritual purity. You can call yourself "Muslim", but in the same time blow up the mosque, commit an injustice against both the adherents of a different faith, and the fellow believers, but this is not Islam ... I congratulate everyone on this holiday and wish prosperity and happiness! "

After the prayers, all the faithful were invited to the table with sweets and fruits. Children were eagerly waiting till two trampolines were inflated: for kids and teens. Director of the Children's Club "An-Noor" Maryna Malyhina said that because of the trampoline they had not planned rich children's program for the day, just a small concert with poems and nasheeds about fasting and faith in God:

"When the trampolines are placed, all the children are on it. Trying to distract their attention to something else is a waste of time. So the festive program with games, quests, quizzes and competition "who will lay the table for suhur most quickly" was held a little earlier, on the third of July.

250 Muslims came to Dnipro Islamic Cultural Centre to share the holiday spirit with fellow believers. Each little parishioner received small gifts after the prayer — the book of children's adaptation of the Quranic stories and balloons. In addition, trampoline, cotton candy, aqua makeup, sweets and fruit were prepared for children in the yard of the ICC. While the children frolicked on the amusement and turned their faces to the painter, the adults enjoyed the sweets from buffet and the talk, drinking tea or Arabic coffee.

More than a thousand of parishioners of Kharkiv ICC congratulated each other on a holiday in the mosque and in the centre courtyard. In addition, today the results of the charity auction were announced. The Muslim women had been carrying out that auction during several Iftars in favor of the orphanage for disabled children. They have held the big information campaign and have shown the video about that child welfare institution. Everyone could buy baked cakes, cookies, pastries and glazed cakes, participated in good work in such way.

"The price was fixed —10 UAH per portion, but who wanted gave more. There were even those who did not take anything, but just dropped the money in the alms-box"— says one of the participants of the auction, Svitlana Putilina.

After converting the revenue to the national currency (in addition to hryvnas, there were dollars and euros, as well as more "exotic" bonds, such as riyals), the amount was 3140 UAH. This is not the first auction. Last year, for example, Muslim women collected 2,000 UAH, and paid it for the information billboard about Ramadan and its merits.

After the prayer, the traditional joint breakfast for women was held, the money for which they were collected previously. In addition, there was the table with fruit, juices and sweets.

Almost two hundred believers celebrated Eid al-Fitr at the Islamic Cultural Centre of Sumy that had been opened in the eve of Ramadan. After the prayer, all comers were invited to the table with sweets. The children were presented with a book adapted the Islamic Koranic stories. In addition, the holiday was marked by another joyful event for Muslims of the city: after the prayer and the khutbah, two girls converted to Islam, pronouncing the testimony of monotheism.

More than eight hundred faithful gathered for Eid prayers at local ICC. After the prayer, an interesting holiday program was prepared for the little Muslims: animators, gift toys, cotton candy, biscuits, sweets, juices, fruit. Adults were slowly drinking tea and coffee with sweets, waiting for the second part of the holiday. At 11 o'clock the couple decided to celebrate the Muslim Eid al-Fitr, and to get married under Sharia marriage that day. Our sincere congratulations to the newly married couple!

About three hundred and fifty believers gathered at the festive prayer in the mosque of the Islamic centre. The guest of honor, the head of department of international relations and religions of Zaporizhzhya Regional State Administration, Pavlo Myalo, also congratulated Muslims that day.

After the prayers and greetings, children received their gifts (toys and sweets), and rushed to the inflatable trampolines. Women were invited to take part in a quiz, during which the participants were awarded with small prizes for the correct answers on the questions. Of course, oriental sweets, biscuits and juices were prepared for all visitors of the centre.

Islamic Cultural Centre named after Muhammad Asadtraditionally celebrates Eid al-Fitr for two days. Today, there were planned the prayer, attended by up to 240 people, and a tea party with sweets. Tomorrow the main program will begin: children's party with a trampoline, gifts, games and competitions, as well as holiday dinner with pilau, sweets, tea and coffee, to which everyone is invited.

Diligent kids, who had participated in the training program on the fundamentals of Islam and the Qur'an during Ramadan, received one more gift: Diplomas and school supplies were given for all excellent pupils.