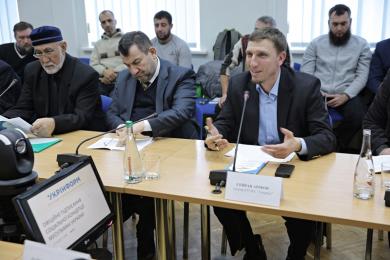 All-Ukrainian Association “Alraid” was one of the initiators of the Ukrainian Muslims Social Conception and became one of the 37 organisations to sign the document on 11 December 2017 at UkrInform Agency. The full text (in Ukrainian) can be found on RAMU “Umma” website.

“As one of initiators of the document, we totally support it. [...] This is a kind of developing the ideas expressed in the Ukrainian Muslim Charter, a specification, I would say. And, of course, this signing is not just a newsmaker, not a mere formality. Those ideas have to be implemented, and the document has to be popularized among Muslims in a variety of ways,” said the Head of CSUAUA “Alraid” Seyran Aryfov. “We will make every effort to implement it.”

As noted by Mr.Anwar Derkach, journalist and moderator, Ukrainian Muslims Charter had been signed in that very same hall a year earlier. The Charter was a general document positioning Ukrainian Muslim community in the society.

“Post factum, I came across criticism, unpleasant and unjustified, up to accusations of renouncing the basis of our faith. I am pretty convinced that the document that is to be signed today — qualified as fatwa, with all the necessary daleel (theological proof) from the Qur’an and the Sunnah — that this document will clarify the general provisions of the Ukrainian Muslims Charter,” said Mr.Derkack while opening the ceremony.

The Conception covers all the important fields of modern Ukrainian life: patriotism, war, education, healthcare (including the matters related to being a donor), economy (including social responsibility of businesses), ecology (including defending the animals against cruel treatment), charity, etc. The Concept is characterised as fatwa, a theological ruling developed by the most profound Muslim theologists of our country with deep understanding of not only the theological matters, but also the everyday life realities here in Ukrainie. The Conception is based on Qur’an, Sunnah, and as well takes the Ukrainian legislation into consideration.