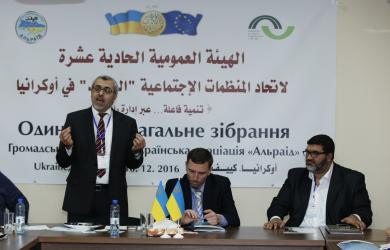 All-Ukrainian Association "Alraid" has held the XI General Conference in Kyiv. It was attended by the leadership of the Association, the chairmen of the departments, the heads of the organisations-members, the representatives of the Kyiv National clannishness groups, as well as by Samir Faleh, Secretary General of the Federation of Islamic Organisations in Europe (FIOE).

The invited guests addressed the assembled delegates after reading the verses of the Koran. In his speech, Secretary General of the Federation of European Muslims said that the achievements of "Alraid" in the establishment of the positive image of Islam in the non-Muslim country could hardly be overestimated. The guest from Europe also congratulated Ukrainian Muslims with the important historical event in their lives that was the signing of the Charter of Ukrainian Muslims. He stressed that association "Alraid" worked effectively in order to avoid viewing Islam and Muslims as something and somebody alien and hostile to the Ukrainian society.

After the ceremonial opening of the conference, the head of "Alraid" Bassil Marei read a progress report for the 2013-2016 years, telling the audience about the progress in the administrative, cultural, spiritual, educational, charitable, informational and other spheres of Association activities.

The participants learned about the difficulties, met by the Association in the past period, and expressed gratitude to the Executive Committee of the Association for its active work.

The Chairman of the Audit Committee, Seyran Arifov, made the report, which referred to the most important activities: the expansion of the information activities, the training future personnel, the rationalization of costs, and the maintenance of the Muslim identity in Ukraine.

The conference is resulted in the following recommendations:

1. The participants express their gratitude to the members of the “Alraid” organisations and its departments for their active and successful efforts in implementing the five-year strategic plan of the Association.

2. The conference underlines the importance of the unity of Muslims of Ukraine and Europe on the basis of Islamic brotherhood, as well as the need to strengthen the foundations of cooperation and integration to avoid the causes that lead to disunity. The Almighty says in the Quran: "And hold firmly to the rope of Allah all together and do not become divided" (3: 103), as well as “... do not dispute (with one another) lest you lose courage and your strength depart.” (8:46).

3. The conference underlines the importance of the close cooperation between departments, organisations, and members of the executive committee of the Association, as well as the need to improve the work organisation, based on the principles of planning, evaluation and monitoring of the activities.

4. The conference emphasizes the importance of different kinds of educational activities and programs for young people and adolescents, as well as for Muslim families, which have a huge impact on the second and third generations of Ukrainian Muslims.

5. The conference stresses the importance of spreading the true image of Islam among the younger generation of Ukrainian Muslims, explanations of the Islamic principle of the moderateness, directing energy and efforts in order to serve the society.

6. The conference urges the Muslims to beware of all kinds of movements and organisations that are seeking to divide them on the basis of any belongings, and it reminds them of the responsibility before God to maintain the unity.

7. The conference urges the Islamic organisations of Ukraine to cooperate closely during periods of fasting, Islamic festivals and similar events to maximize the Ukrainian Muslim satisfaction of cultural and religious needs.

8. The conference urges the Muslims of Ukraine to strive for the development of Ukrainian society and the solution of its problems.

9. The conference reaffirms its solidarity with the oppressed Arab peoples in their way to justice, equal rights and elimination of internal disunity.

10. The conference underlines the importance of the following vigorous activity of "Alraid" as a bridge between Ukraine and the Islamic world.