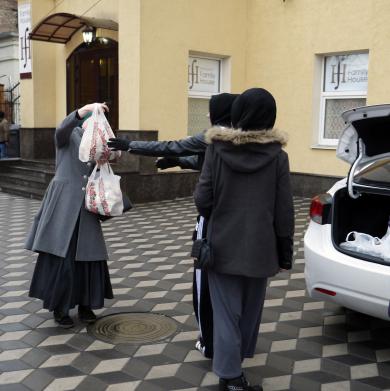 70 portions, complemented with apples and pies, were delivered to the soldiers

Mashed potatoes, two delicate steamed chicken cutlets and a vegetable salad — a homemade meal, suitable for the hospital patients, the wounded soldiers from the ATO zone. 70 portions, complemented with apples and pies, were delivered to the soldiers getting medical treatment at Kyiv Central Clinical Military Hospital by Kyiv Muslim women — activists of the Social Organisation “Maryam” and non-indifferent parishioners of the capital’s ICC mosque.

Unfortunately, they can’t cook such great amounts of portions very often because of limited resources, but still they try to throw such “cooking parties” as much as they can in order to give the fighters some positive emotions. The women already held mass benefits on cooking the pilav, varenyky (traditional Ukrainian dumplings), cabbage rolls, manty (oriental meat-stuffed dumplings), and many other, though less scaled, events.

This time, the activists raised part of the necessary sum, and the rest was donated by Islamic Cultural Centre. The meals were cooked at halal Family House Restaurant's kitchen, and the fruit and bakery were brought by the women from their homes.

With the help of two teams of the Hospital permanent volunteers, they didn’t need a lot of time to find the ATO veterans among the rest of the patients: the guests were taken right to the wards of different departments, including Trauma unit, Ophthalmology, Surgery, Proctology, Urology, etc., and 25 portions were delivered to Psychiatry unit.

The Muslimahs went there to give some positive emotions to the wounded, but ended up with a great boost of good mood for themselves, and left the hospital in the uplifted spirits. The fighters asked questions, thanked the women for the hot homemade meals and sincere wishes to get well soon, and were so happy to see the guests, that it was just impossible to remain indifferent.

And, of course, the activists of Kyiv Islamic Cultural Centre are willing to proceed with such benefits while the soldiers get wounded, for giving kindness and gratitude is the least they can do for those who risk their lives for the safety of each of us. And Prophet Muhammad, peace and blessings be upon him, taught us that “one ungrateful to the people is ungrateful to the God”.