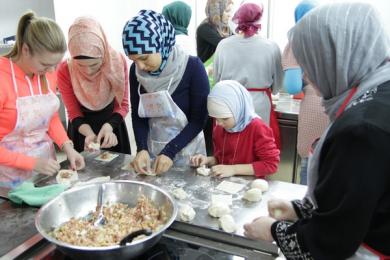 Benefits on joint cooking at Kyiv Islamic Cultural Centre are held almost every weekend: local muslim women decided to vary the hospital diet for the soldiers, wounded in the Anti-Terrorist Operation zone who now get their treatment at Kyiv Military Hospital. This initiative was supported by some Christian girls as well, who’ve joined the cooking for several times already. This Sunday Ms.Varvara Plitus, a “5 Channel” journalist, decided to join the process as well and brought along the filming group. The video plot (in Russian and Ukrainian) is available here.

This initiative was prompted by compassion to compatriots, who were wounded while defending Ukraine from invaders and terrorists: “Many young men are all alone there, because their relatives live far away and can’t visit them often. Of course we try to feed them with homemade food, cheer them up, help as far as possible, so that they wouldn’t feel abandoned. We never limited our help to only Muslim soldiers — this is our common Homeland, and we all are one nation and have to support each other in hour of need, without dividing based on ethnic or religious background,” — one of the volunteers shares.

Ms.Inna Broshkivs’ka told, while cutting the onions, that she had to leave Syria for the reasons of security three years ago: “I know first-hand what life in combat zone is. For that reason, I understand more or less clearly what these men have been through, and, of course, I wish soonest recreation for our guys.”

The treats, hot and hot, were at once delivered to the Military Hospital, to gladden the men with what they’ve been deprived of for a long time, but what most men have soft corner for: homemade meals with meat.