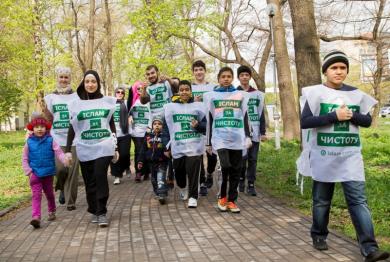 Ecology benefit that unites people in cleaning parks and leisure areas is held traditionally in Ukrainian towns and cities in spring. This ecological initiative by a youth movement “Let’s Do It. Ukraine” (within the framework of international initiative “Let’s do it, world!”, which already united 112 countries) is meant to draw public attention to ecological problems and lick people into shape of caring for the environment. Muslim volunteers didn’t stay aside: activists of Islamic Cultural Centres (of Kyiv, Kharkiv, Dnipropetrovsk and Zaporizhzhya) stepped hand by hand with thousands of Ukrainians in order to make their vital space cleaner.

A spit in Kyiv didn’t yet throw cold water on the enthusiasts: young people, teenagers and even children came along for the cleaning. Their parents correctly reasoned that such experience would help their offsprings in developing a healthy attitude towards environment. So, as soon as the sun sifted through the clouds, the work in Kyiv Polytechnic Institute Park started humming. Now the lawn delights the eye with juicy green grass and bright spring flowers.

About 20 people,including kids from Sunday School of Arabic and Students from Morocco, Libya, Palestine, Jordan and Tunisia  took part in cleaning Gagarin Park near Dnipropetrovsk National University. They bought gloves and garbage plastic bags and came a bit earlier in order to be one of the first to start such a good activity, and were so carried away that they cleaned neighboring stadion as well. The University’s vice Principal, who met them while in work, was pleasantly surprised and wished to mark the young Muslims’ efforts with a commendation on behalf of University.

25 Muslim activists from Zaporizhzhya collected more than three dozens plastic bags of litter at the “Labour Merit Park”, doing their best to match their activities to the park’s name.

At the same time Kharkiv Muslims cleaned three locations at once, as more than five dozens of volunteers came to paticipate in the benefit.