People of Science, Politics and Public Sphere Came To Congratulate Muslims Upon Eid-al-Fitr: “For Only Together We Are Strong!” 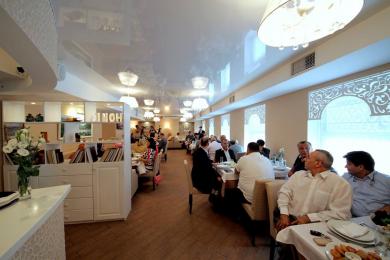 The guests, on their part, appreciated the homey atmosphere of the Islamic Centre, Muslim hospitality, tables’ serving and delicious food

For Muslims, Eid-al-Fitr is not just a holiday to celebrate the termination of Ramadan, but also a chance to strengthen social ties of friendship with both adherents and people of other religions. AUASO “Alraid” and RAMU “Umma” did just that, having organised a joint ceremonial reception for state officials, public persons, people of art and science, foreign diplomats and leaders of ethnic communities.

Mufti of Religious Administration of Muslims of Ukraine “Umma” Shaikh Said Ismagilov in his complimentary speech said: “We, the Muslims, usually invite guests to share the joy of this day with us. Thank you for accepting our invitation and coming; this is very important for us!” Mr.Bassil Mareei, head of AUASO “Alraid”, added: “I’m happy to welcome all of you at Kyiv Islamic Cultural Centre on this festive day!”

The guests, on their part, appreciated the homey atmosphere of the Islamic Centre, Muslim hospitality, tables’ serving and delicious food. For instance, Mr.Andrey Yurash, Director of Department for Religions and Nationalities at the Ministry of Culture of Ukraine, appreciates respect and cooperation that Ukrainian State developed with its Muslim communities: “The State makes everything for any citizen — Muslim or Non-Muslim — felt maximum comfort. And I’m very happy that I, Non-Muslim, am always comfortable during my visits to Islamic Cultural Centre. Having come here for this feast, found myself in a homey family atmosphere. And I believe that those beautiful aspirations and prayers performed today will only strengthen this mutual understanding and respect.”

The guests also shared their vision of the role Muslims play in evolution of Ukrainian society. Thus, Mr.Rostyslav Karandeev, Deputy Minister of Culture of Ukraine, marked the input Muslim communities made in helping the internally displaced persons, having stressed that what he liked most was the fact Muslims made no difference for those people’s religious views and helped both Muslims and Non-Muslims. “We have a common Homeland and common problems — and religion in this case helps each person overcome the hardships and extend a helping hand to those around.” Ms.Olha Bohomolets’, MP, had a similar opinion: “I want to say that Ukrainian nation is very happy to have followers of Islam as part of it — your representation, your culture, and your people — honest, hard-working and devoted, helping us develop our common Homeland  and its economy, and stand against our enemies, both external aggression and internal corruption. I want to wish peace for all of you, consent in your families, love, inspiration, many children and most of all — peaceful Ukraine!”

Mr.Dmytro Korchinskii, famous politician and leader of political party “Bratstvo” (Ukr. “Brotherhood”) and his wife Oksana Korchinska, MP, mentioned that Ukrainian Muslims stand for Ukraine and stressed common tradition in Islam and Christianity. “We are happy that Ukrainian Muslims are patriots of this country, for the nation contains many ethnic and religious groups united by love for this land given to us by God. Many Muslim fighters joined either the army or volunteer battalions. Defending the country, helping the fellow countrymen, participation in social initiatives — this is the patriotism, not by words, but by seeds,” Oksana Korchinska stressed. Her  husband,in his turn, noted that that it’s always easier for believers of different religion to understand each other than people who don’t believe in God: “Muslims now are fasting in the same way the early Christians did, and we can have a kind of touch of our early tradition when dealing with you/ All the pillars of faith you have in Islam, we have in Christianity, and we deeply respect your religious views. It’s always easier to deal with truly believing people, when if they follow a different religious tradition.”

Singer Jamala spoke of importance of remaining humans and always helping others, as this is exactly the thing fasting in Ramadan teaches us all; and PhD Anatolii Kolodny told that he often wears a traditional Ukrainian embroidered shirt accessorised by a traditional Crimean Tatar hat, and answers people’s surprised questions that this is a gesture of respect for Ukraine’s both indigenous peoples.

Such events connect and unite people, agreed Mr.Olexiy Trofimov, Deputy Director of Kyiv Municipal Department of Education, Science, Youth and Sports and head of Family, Youth and Sports Department; Ms.Tetyana Logush, Chairwoman of Charitable Fund “Hudozhestvennaya Kazna” (Ukr. “Art Treasury”) and Ms.Tetyana Kotseba, Chairman of International Social Organisation “Federation Of Women For Peace All Over The World”. They all marked the importance on self-improving spiritual practices and maintaining good neighbourhood, especially in this difficult time, for only together we are strong!