Ready For Ramadan: A Seminar For Muslim Women Of Zaporizhzhya 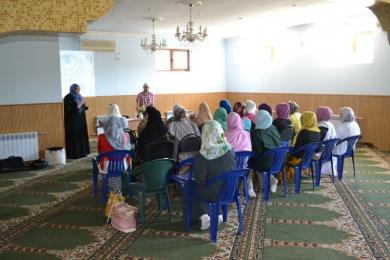 Zaporizhzhya ICC Mosque Imam Muhammad Mamutov along with the Centre’s Women’s Department took care that their parishioners were prepared for Ramadan in advance. As women are concerned in most questions arising from the duty of fast, they facilitated and held a seminar for the fair sex, several days prior the beginning of Ramadan, on June 13.

Before covering the matters of fasting, the Imam reminded that every Muslim is a guide to Islam for other people; it depends greatly on each of us what other Ukrainian people’s perception of our religion and our brothers and sisters in faith is like. he stressed that God Almighty laid the burden of informing about Islam upon every Muslim, but He never gave any Muslim the authority to give “verdicts” upon other people’s faith or infidelity, inner motivation and future.

His colleague Muhammad Alustaz, Imam of Luhansk Cathedral Mosque, spoke about Shirk and its types, and also explained fiqh of fasting during Ramadan. The lecturer tried to accommodate his speech to the audience as much as possible, and complemented it with questions and answers session. He told what ruins the fast, who is free from fasting, how one can make up for days of Ramadan missed for a good reason, and in what occasions purge fasting is obligatory.

Mr.Tariq Sarhan, a guest from Kyiv, spoke about upbringing Muslim children in non-Muslim society. He stressed that isolating the child from the rest of the world is as wrong as leave them unattended, as a child isolated from all the temptations of the non-Muslim environment won’t be able to resist them as an adult, having no experience of self-restriction. Mr.Sarhan recommended to adhere to Sunnah of Prophet Muhammad, peace and blessings be upon him, and, on the contrary, be active members of the communities we live in, at the same time being a rolemodel for our children and forming their attitude to different phenomenons by our own attitude and actions. Such parenting practices teach the children from the very early age not to separate from the society, and stick to their own moral values at the same time.