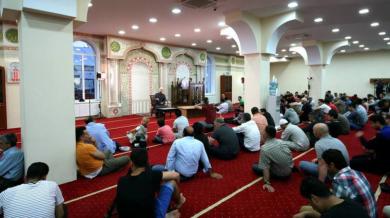 Number of parishioner at Islamic Cultural Centres situated on the unoccupied territory of Ukraine increased two to three times. Number of believers in some cities that had very small communities earlier increased of scale!

Muslim communities. having cooked some more portions than necessary, as usual, faced the problem that quantity was far from enough on the very first day of Ramadan. Dates and water were enough for everyone, but there was an obvious deficit for hot meals.

Spirit of mutual support helped overcoming that awkward moment. Murti of RAMU “Umma” Said Ismagilov wrote on his Facebook wall: “People shared their food with each other so that noone would remain hungry. And that’s only for the men who came to the mosque at 9:30 PM! How many people didn’t simply go because of the late hour; how many women and children stayed at home for the same reason!”

The situation, however, improved on the very next day, as the Centres increase the quantity of food cooked significantly, so there was a full portion for everybody again.

“We count that experience, and now we are uniting our efforts so that our Centres are able to accommodate more and more believers, because Ramadan is, indeed, a blessed month, and each Muslim must have a full opportunity to make maximum spiritual profit of it!” — Mr.Ismail Qady, Deputy Head of the AUASO “Alraid”, said.

Due to this new circumstance, the Centres’ activists are already preparing to accommodate much more people for the festive prayer of Eid-al-Fitr this year.