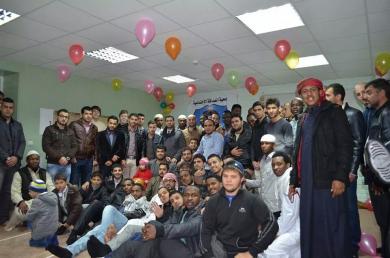 A small Muslim community of Sumy distributed more than a ton of sacrificial meat among the poor and needy people, namely those resettled from the ATO zone, pensioners, students, large families. They managed to collect enough money for purchasing as many as 86 rams this year!

As for the community itself, they started preparing for the feast in advance. On the day af Arafah, volunteers from social organisation “Druzhba” (Ukr., Rus. “Friendship”) organized a joint iftar for everyone who spent that day fasting (according to the Sunnah of Prophet Muhammad, peace and blessings be upon him). After the festive prayer on the next morning, they facilitated a festive banquet and folk entertainments, after which the men went to perform the ceremony of sacrifice.

In the evening students of Medical Institute at the Sumy State University facilitated a feast at their Alma Mater, having invited the University administration and their non-Muslim classmates. They told about the spiritual meaning of the feast, about the necessity to share what you have with those who have less and are in difficult situation, and also treated everyone with sweets and fruit.