Gymnasium “Our Future” Has Successfully Completed Its First Academic Year 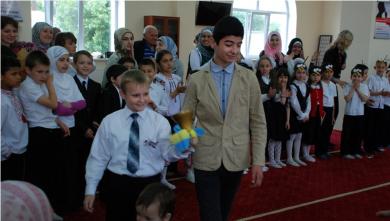 Gymnasium “Our Future” Has Successfully Completed Its First Academic Year

Last bell in this academic year rang in Gymnasium “Our Future” this morning. The schoolchildren started their summer holidays with a safe conscience: all the tests were successfully passed, certificates for profound academic skills received; there were no graduation classes in the Gymnasium this year, so each and all was free to enjoy the summer holidays.

Both the administration and the pupils fully concentrated in the feast, as they already summarized the results of their first academic year earlier: the first-grades had their “Farewell, My ABC Book” party, and the linguists reassured that the Gymnasium decision not to participate in nationwide linguistic contests of 2014–2015 during the first operation year was rather playing safe than the real need, as the pupils demonstrated their profound language skills allowing them to be worthy participants of any contest.

the Farewell Bell was open with the traditional recitation of Qur’an and joint singing of Ukraine’s State Anthem. After Mr.Bassill Mareei, Head of the AUASO “Alraid”, and Ms.Vira Fryndak, the Headmistress, held their complimentary speeches, reins of power were given to the children, who not only recited poems and sang and did some stage play, but also were the emcees of the event.

Pupils of the Junior School were seeing the former fourth-grades off to the high school; the latter on their part, presented the little ones with “The Book Of Knowledge” meaning that they still have to learn a lot of things.