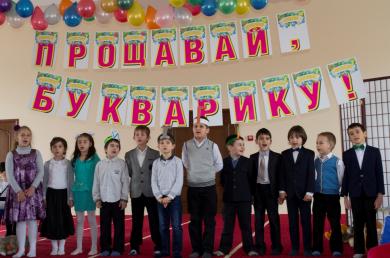 First grade pupils of Gymnasium “Our Future” at Kyiv Islamic Cultural Centre had a solemn “Farewell, My ABC Book!” ceremony.

Teachers, Ms.Maria Sankevitch and Ms.Marina Gavriliuk, think that this book was very important forevery freshman, at it’s this book that opens a new perion of the kid’s life as a schoolboy or schoolgirl, and a solemn farewell ceremony commemoratesthe schoolchildren’s maturing and becoming the full members of the school community.

“It’s a very important day, as  eight months earlier little unexperienced kids made their first step towards their responsible life and became schoolchildren at the age of six. It was the ABC book that guided them to the new field of gaining academic knowledge and helped them memorize all the letters, taught them how to read and gave them their first assignments. So today they said “Good-bye” to the book that built a basis for studying more serious literature, more complex textbooks and gaining more information. For that reason, that ceremony was very important for every schoolchild, as they already climbed that very first step towards knowledge,” — Ms.Maria Sankevitch, a teacher of the form 1a, shared.

Ms.Marina Gavriliuk, a teacher of the form 1b, spoke about drafting the script for the feast and how they tried to involve every child in it, so that the kids would remember it for long: “We planned to have a smaller ceremony at first in one of the classrooms, but later we decided to involve second, third and the fourth grade as well. For that reason, we needed a larger room, as a lot of parents came, too.”

“The elder children welcomed the small ones with poems, there was some sceneplay and fairytale characters… A pupil of the fourth grade acted as the ABC Book, as he had a long way behind comparing to the first-grades,” — the teacher said.

The parents of the small ones worried as much as they did watching their descendants successfully completing their first year at school. Every pupil received a memorable gift.

Ms.Maria Sankevitchsaid that her pupils are looking forward to continue their education right now, willing to be the second grades already. “We’ve grovn up, we’re not the firsn graged any longer!” — quotes the teacher and says that they really take the farevell for the ABC books ceremony as someturning point  towards the “adult life”.

“They are so proud to have coped with their first textbook, and sparkles in their eyes show that they indeed will remember this moment for a very long time,” — she says.

It bears reminding that Gymnasium “Our Future” is an educational body at Kyiv Islamic Cultural Centre. Subjects are taught in Ukrainian, while the schoolchildren also learn English, Arabic and Russian. Individual approach for every child is the advantage of the private Gymnasium “Our Future”, where tutoring is given in classes of 5 to 15 kids. This allows to unlock each child’s creativity.

The child learns twice more during the lesson with individual approach comparing to ordinary public school.

Gymnasium “Our Future” unites secular education and spiritual traditions. Advanced curriculum of Ukrainian language and history comes along with the thorrow study of Arabic texts and the Holy Qur’an, making a positive impact on the child’s intellect. Besides, Muslim tradition always inspires to seek more knowledge, gives the idea that general education isn’t enough. This inspires the child to learn something new every day.